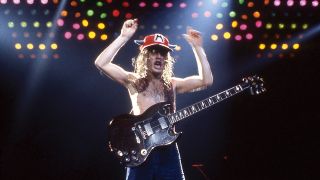 To anyone outside the hard rock tent, it’s laughable to hear that there once was a time when AC/DC yearned to get back to basics.

Nonetheless, 1981’s For Those About To Rock (We Salute You) had reached a level of studio sophistication that felt unnecessarily fussy to Malcolm and Angus Young. What had worked so well with producer Robert John ‘Mutt’ Lange on the preceding two records – crisp tour de force Highway To Hell (1979) and the sans Bon phenomenon Back in Black (1980) – was applying reasonable rigour to making AC/DC sound extremely loud and incredibly close. For Those About To Rock found Lange questing ever further for sonic perfection, which was a time-consuming process. After this Michelin-starred philosophy, the Young brothers wanted to take a greasy spoon approach to their next album. To that end, they chose to produce it themselves.

Flick Of The Switch is the result of this decision. It was recorded at Compass Point Studios in Nassau, the capital city of the Bahamas. This was where AC/DC had created Back In Black , but though the new raw tapes sounded reminiscent of their greatest commercial triumph, it was mixed by engineer Tony Platt to impart a different feel. “I don’t think that was a good thing to do at all,” Platt later remarked.

The Young brothers had wanted something more immediate, less refined, than their last record. This they got, as Flick Of The Switch definitely seems thrown together and lacks the Kubrickian craftsmanship of a Mutt Lange piece. The unalloyed audio isn’t what’s wrong here, because a bit of grit never hurt an AC/DC song – the problem is that the songs are unexceptional.

The material ranges from weak (Bedlam In Belgium, Nervous Shakedown) to acceptable (Guns For Hire, the title track, Badlands) by way of boring (Rising Power, Deep In The Hole). There’s a tang of reheated leftovers about the riffs, while lyrically the leitmotif has shifted from impish to oafish. A change from Lange wasn’t necessarily a mistake, but not having a strong producer involved to make sure AC/DC cut the mustard certainly was.

Released on August 15, 1983, Flick Of The Switch contains zero hit singles. It initially sold 500,000 copies in America to reach No.15 on the album chart, eventually cracking the million sales mark 18 years later. In the UK it debuted at a peak position of No.4, pushing Spandau Ballet’s True down a notch but unable to muscle past Fantastic by Wham! to climb into the medal positions.

By AC/DC’s standards, it was a monumental failure. They were a man down, too, after Malcolm Young had got into an extremely heated personal disagreement with Phil Rudd in Nassau. The drummer’s restrained sense of purpose behind the kit had anchored the band’s inimitably straightforward rhythm unit since 1975. Regardless of the quality of his service, Rudd’s run‑in with AC/DC’s fun-sized guv’nor abruptly left him free to explore new career opportunities.

During the ensuing tour, AC/DC’s profile was still sufficiently high for them to be covered by US celebrity weekly People magazine. “Angus, the group’s wild man onstage, is actually a teetotaller away from the spotlight who uses his private time to paint landscapes,” noted the report from one of two shows played at Philadelphia’s Spectrum arena in November 1983. It also revealed that Brian Johnson was particularly enjoying a biography of Winston Churchill. The man from People was lucky enough to meet Johnson’s father, a retired sergeant major who had this to say about his evening: “I was at Monte Cassino when the Americans flattened the place, and I was at El Alamein when we knocked Rommel back with a big barrage of guns, but I’ve never heard anything as loud as this in my life.”

Business on the Flick Of The Switch dates was far from brisk, though AC/DC’s commitment to intense live performance – with 20-year-old Simon Wright on drums – was never less than total.

A perspicacious quote from one of the era’s big hitters of a different type, Mike Tyson, rings true for AC/DC’s situation following Flick Of The Switch: “Everyone has a plan until they get punched in the mouth.” The band had undoubtedly taken a commercial and critical one-two right in the kisser but instead of adjusting their tactics, they pressed ahead. By electing to again self-produce for 1985’s Fly On The Wall, they were inviting another blow to land. Sure enough, the haymaker that duly arrived struck them firmly in the area directly below the belt.

Illustrated by pop surrealist Todd Schorr, the cover of Fly On The Wall is awful for two reasons. First, as a literal interpretation of the title it fails because the cartoon fly depicted is not on the wall but – as evidenced by a backdrop consisting solely of floorboards – on the floor. Secondly, the knothole in the ‘wall’ through which a single eye peeps disrupts the lettering so it reads ‘Flo On The Wall’. The band’s logo being correct and legible is all that has gone right here. So the packaging isn’t exactly vintage, but it’s the music that counts.

Unfortunately, on this score, Fly On The Wall is lacklustre from start to finish. Recorded at Mountain Studios in Montreux, the production is rattly and thin. Johnson’s vocals receive especially poor treatment, so deep in the mix as to suggest that he was shouting from an adjacent bathroom with a lukewarm flannel pressed to his face.

Charitably, it could be said that Sink The Pink and Shake Your Foundations translated well as live tracks, but neither has been a set list mainstay for 30 years. Danger is comfortably among the most disgracefully lazy songs AC/DC ever concocted and that was put out as the lead single. The album got to No.7 in the UK but didn’t breach the Top 30 in America, where it sold 500,000 copies (platinum certification was awarded in 2001). The reviews, too, were negative. While Flick Of The Switch could be explained away as a well-intentioned misfire, this was just embarrassing.

Now some might argue that AC/DC were simply at odds with the prevailing winds of the genre. Indeed, Johnson has said that around this time it was suggested by the band’s label that they might benefit from an image overhaul (he recalls that the reply consisted of two words; the second was “you”, the first was not “thank”). Yes, Mötley Crüe’s Theatre Of Pain album had just come out with a hit, Home Sweet Home, that initiated hair metal’s power ballad gold rush. The idea that glamorous personnel and slow songs equated to fast success – aided by MTV-friendly videos geared for crossover appeal – made sense if you were one of the berks in Poison, but AC/DC were a country mile away from the section of rock’s Venn diagram populated by such poseurs. This was a band built on substance over style. Fly On The Wall stiffed only because it had no substance whatsoever.