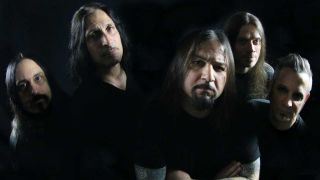 A Pale Horse Named Death frontman Sal Abruscato has had a shitty few years. Personal drama, professional turmoil, health issues – you name it, it's happened to him. Luckily for us, he’s poured his anguish into his band’s third album, When The World Becomes Undone. “If it could have happened, it happened to me,” says Sal drily today.

It’s been five years since the last A Pale Horse Named Death album. Why the delay?

In my head, I was always going to revisit the band, but life got a little complicated. It threw a few curveballs to me and my wife five years ago, so that took over. Then I got involved with Life Of Agony again, but I ended up leaving eventually because I had things going on in my life that I wanted to pursue. Life’s too short, and I was getting tired of it. And here we are.

When did you start work on the album?

In my mind, five years ago. I had the title and the concept for the album in 2014. Things were going a little haywire then. I mean, they still are. But it seemed like the world was falling apart. It was the height of the whole Isis thing. 2014 was the height of the whole Isis thing. The were chopping fucking heads off every fucking day. All this crazy shit going on. I was watching the news, and I said to myself, ‘Just look at what they're doing, we're back to this barbaric Mongolian time. Wow, this fucking place is falling apart, what the fuck is going on?’ And guess what? We’re no better now. But that feeling also tied in with my personal life, as far as hurt and grief went.

What personal stuff were you going through?

Five years ago, our little daughter was born. And she was born with a unique condition that's very rare. She was born disabled, born blind - a cartilage condition. She had opaque corneas, and she had to go though corneal transplant surgery at ages three months and six months. So that kind of threw a curve ball with a lot of things. All of sudden we found ourselves thrown into a unique situation that we had to adapt and do what we had to do.

How is your daughter now?

This little kid… The corneas rejected, so she went blind again. She’s had her third transplant in July. She’s had anasthesia over 50 times. I’m 48 years old, I never had anasthesia in my life. Hopefully she may have some vision again. It’s very complicated. That was one of the things I was going through that led to my demise with Life Of Agony. I don’t want to bring you down, but it’s one of the dark situations that fed my depression on the album, along with the betrayal of friends, a family feud, all this stuff going on.

Was making the album cathartic?

Yeah. It feels good just to put things out there in the light, and let it go, try to relieve the tension and pressure, to vent it out. It's definitely one way to do it. But life is really complicated. It’s a constant battle. It doesn't end to this day.

Was there ever a point where you thought, ‘Why am I bothering?’

Absolutely. It's a tough battle, dude, it really is. And I was diagnosed last year with a condition that is a pre-cursor to myloma, which is a blood cancer. I have to get checked every three months, because if it turns aggressive, it becomes myloma. Two years ago, they though I had leukemia. It was making me go nuts with all these tests. I had to quite smoking cold turkey. Dude, I can keep on talking. I have so much material I can keep going.

You played drums in Type O Negative. Is this the first band you’ve sung in?

Were you nervous the first time you stepped onstage as a singer?

Oh yeah. My first show was opening up for Monster Magnet in New Jersey, and I was, like, “Oh my god, how did I get into this mess?’ It was crazy, but I kept on working at it, I had the ear, but it's a lot of work, Being a vocalist is the hardest job. It is brutal. It puts a lot on you.

Who are your big vocal infuences?

Jim Morrison, for sure. He's definitely a big influence. Guys like Layne Staley, Ozzy when he was in Black Sabbath. And Peter was an influence on me in a lot of ways, as far as melodies and writing. Not that I'm anywhere near that ability of calibre of any of those guys.

Speaking of your old band, A Pale Horse Named Death feature drummer Johnny Kelly, who replaced you in Type. How did that happen?

He wanted to be in the band. We were, like, ‘OK, we got the two drummers from Type O, this should go over well. Everyone would be curious.’

They are. Does it mean you’ll be playing Type O Negative covers live?

No, I would never do that. I think it would be… not right. No one’s going to sound ilke him. Nobody sings those songs like he does.

So this isn’t a Type O Negative reunion then?

A Pale Horse Named Death’s When The World Becomes Undone is out now.