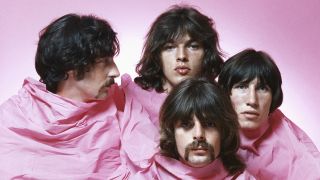 Few bands have produced two visionary musicians. Virtually none have given the world three. Pink Floyd are a rare exception. Between them, Syd Barrett, David Gilmour and Roger Waters have created some of the most iconic music of the past 50 years.

They may have grown up together in Cambridge, but the trio were always radically different personalities. Barrett was Floyd’s original beating heart: one part English eccentric, one part acid-kissed space cadet. When he left the band in 1969 after one bad trip too many, he embarked on a brief solo career that swung between fragile genius and heartbreaking instability.

If Waters and Gilmour were very different to their former frontman, they were the polar opposites of each other. Where Waters was the architect, Gilmour was the artist. The bassist favoured a strident, dictatorial approach, one that saw him taking charge of the concepts at the heart of every Floyd album from The Dark Side Of The Moon onwards. The guitarist was more reserved, though no less stubborn, and was the one who gave the band’s music the wings it needed. Barrett’s departure set off a battle between the pair for Pink Floyd’s soul – one that would continue long after Waters quit.

Post-split, Waters, the great conceptualist, ramped up the drama and the rage. Gilmour, meanwhile, doubled down on the stellar musicianship that helped turn Floyd from velvet-panted hippies into progressive rock giants.

Gilmour’s decision to reactivate Floyd for 1987’s A Momentary Lapse Of Reason and 1994’s The Division Bell only fuelled Waters’ ire. The band’s reunion at Live 8 in 2005 seemed to be a rapprochement of sorts, although Gilmour refused to sign up to a full-blown comeback. Keyboard player Rick Wright’s death in 2008 put an end to Floyd’s career, although Gilmour and drummer Nick Mason (now touring his new project Nick Mason’s Saucerful Of Secrets) only officially called time after 2015’s The Endless River.

Today, the two parties exist cordially, if not quite warmly. Barrett died in 2006, but Gilmour and Waters both remain active, even if the whiff of competition still surrounds them. And while neither have truly replicated what they achieved in Pink Floyd, their solo albums still stand as part of that band’s huge legacy.

Twelve years after The Division Bell, no one was expecting a new Pink Floyd album. But with his third solo record, Gilmour gave Floyd fans what they wanted.

The languid mood that saw Gilmour shying away from a post-Live 8 Floyd reunion suffuses the whole thing. It was partly inspired by a holiday on the Greek island of Kastellorizo, and watery imagery abounds – the dreamlike Take A Deep Breath makes death by drowning sound alluring. The pace rarely rises above the sedate, the title track and The Blue lap gently around Gilmour’s guitar.

The sound of a man easing comfortably into late middle age – unlike certain ex-colleagues.View Deal

Most people can’t stay angry forever, but then most people aren’t Roger Waters. Some 25 years on from his previous solo rock record, he returned with one of the great protest albums of the 21st century.

The title track and Picture That bristle with anger at global injustice, institutional corruption and the current occupant of the White House. But the fury is tempered by a new emotion – a tangible sadness that seeps through The Last Refugee and Broken Bones, adding potency.

A perfectly pitched production from Nigel Godrich adds to the picture of a man who has lost none of his fire.View Deal

The myth of Syd Barrett’s first post-Floyd solo album – how it took 15 months, five producers and multiple sessions to salvage these hazy songs from his acid-damaged psyche – overshadows its music.

The end result isn’t a classic album. Moments of clarity such as the sparkling Octopus and the Home Counties campfire country of Terrapin are balanced by the blank-eyed psychedelia of No Good Trying or the painful If It’s In You. But it’s as honest a representation of one man’s mental state as has ever been recorded, even if you can’t help thinking what might have beenView Deal

The animosity between Gilmour and Waters had yet to reach fever pitch when they both released solo albums within weeks of each other in 1984, but it was tangible in both. The guitarist made it
out of the gate first, and that urgency carried into About Face. He sounds like a man unleashed on the fiery Until We Sleep and
All Lovers Are Deranged, while he even drops his usual reserve for
a dig at his nemesis Waters on You Know I’m Right.

The 80s horns haven’t aged well, but that aside it’s Gilmour’s most under-appreciated album, and it’s superior to Floyd’s A Momentary Lapse Of Reason, released three years later.View Deal

Roger Waters - The Pros And Cons Of Hitch Hiking (Harvest, 1984)

In 1978, Waters offered Pink Floyd the choice of two concepts for their next album. One was The Wall. The other would become his first solo album six years later.

A nocturnal waking dream set to music, right down to its time-stamped song titles, TPACOHH charts a journey through the psyche of its confused middle-aged protagonist, Reg. Squint and it could be a Floyd album, with guest guitarist Eric Clapton standing in for Gilmour.

There are musical echoes of Waters’s old band throughout, but it’s also distinctive, unique and frequently batshit crazy in the way that only Waters is.View Deal

Waters’s second solo album, 1987’s Radio K.A.O.S., was a set of great songs sunk by a rotten production and outsold by the reconstituted Pink Floyd’s A Momentary Lapse Of Reason, released the same year.

All Waters’ frustration was poured into this follow-up. This time he heaped scorn on humanity’s fixation on TV while the world went to hell around it. The comparative restraint of Too Much Rope masked a fury that boiled just below the surface. And when he did cut loose, as on The Bravery Of Being Out Of Range, it proved that his righteous ire burned as fiercely as ever.View Deal

By the time of his second album, Syd Barrett was too far out to ever row back again. That didn’t stop his friends from rallying around him – David Gilmour, Rick Wright and Humble Pie’s Jerry Shirley all pitched in to help see it over the finish line.

At its best, Barrett shows flashes of greatness: Baby Lemonade and Gigolo Aunt are sparkling in their nursery-rhyme simplicity. Unfortunately, more often – as on the deadened I Never Lied To You or the stark, blotter-acid blues of Maisie – it sounds like the quiet scream of a man who had given himself over to madness. In that respect it’s equally compelling and depressing.View Deal

The first of Wright’s two solo albums sounds like a man taking a deep breath between the claustrophobia of Animals and the gathering storm of The Wall.

Gilmour called his bandmate’s keyboards “the sound that knitted it all together” in Floyd, but Wet Dreams showed that Wright needed the band to frame his own playing just as much. Without them, the likes of Cat Cruise and Mad Yannis Dance were vaguely new-age instrumentals, pleasant but possessing little in the way of memorable characteristics.

By contrast, Summer Elegy and Against The Odds proved that few people did understated English melancholy quite like Wright.View Deal

With The Endless River, David Gilmour and Nick Mason drew
a line under Pink Floyd. Coming less than a year later, the guitarist’s fourth solo album was the sound of a man freed from the burden of expectation.

A loose day-in-the-life concept threads throughout the album, and it’s hard to see how the overarching lyrical themes of time and mortality weren’t inspired by the death of Rick Wright (the keyboard player is the subject of the graceful tribute A Boat Lies Waiting).

However, the common denominator throughout Rattle That Lock is Gilmour’s evocative guitar, even if it ebbs and flows where it once soared.View Deal