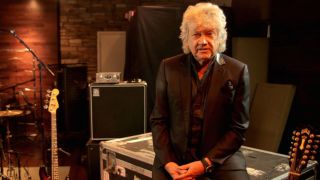 The Moody Blues effectively invented symphonic rock in the late 60s, and constantly evolved their sound over the next couple of decades. However, in addition, Lodge has shown himself to be a shrewd and creative musician as an occasional solo artist. His most recent album, 10,000 Light Years Ago came out in 2015, and now he's about to go out on his own tour around Britain. A Rock And Roll Hall Of Fame inductee, Lodge is showing little sign of slowing down.

How did you put together a setlist for this tour?

I want to take the audience on a musical journey. So I have included Moody Blues tracks which I want to do and also ones that the audience expect to hear. There are also songs from 10,000 Light Years Ago, plus deep cuts from the Moodies catalogue.

Are you paying homage to the late Ray Thomas in the show at all?

Yes I am. I first met Ray when I was 13 or 14 and we grew up together. He was a great mate, so I have included Legend Of A Mind, which he wrote, in the set. I am also paying tribute to Mike Pinder, as he hasn't played live for a such a long time. I want to celebrate both of them.

As there's been no new Moody Blues music since 2003, is it fair to say your solo career is now the focus for writing?

I believe that's fair. And I am enjoying the whole process of writing songs for solo records, because it means I can do it differently to the way I've done in the past for The Moody Blues. I can go from A to Z to W in a composition, before ending at B. I have the chance to experiment, which I love. I am already working on songs for the next solo album. I love the whole process.

You've only done two solo albums. Do you regret not doing more?

I do, but it's always been a case of a lack of time. After I did Natural Avenue in 1977, I had no chance to even think of about doing else on my own, because I was almost straight back in the studio doing Octave with the Moodies, and then we were back out on the road. And to me, I am first and foremost a Moody Blue. So, with all the recording and touring commitments we had for so long, there was never a chance to do another solo album.

Where do the Moodies stand these days?

The problem we have on the recording side is that there is nobody to mentor us these days. We always had people at the label who encouraged us to write and record, and those sort of people have gone out of our lives. Look, I love the whole process of making a Moody Blues album. But without anyone to push us, I cannot see there being any new songs released. I hope we can still tour, but it is now a little problem to get Justin [Hayward] and Graeme [Edge] to agree.

You are joining the Birmingham Walk Of Stars shortly (on April 11 at Birmingham Symphony Hall), along with Carl Palmer. What does that mean to you?

I am proud to be from Birmingham, and it's obviously amazing to get such an honour from your hometown. I am very excited for my family and friends to be there and see it. I will have a lot of old mates who'll be turning up and they'll be able to say, “Look, that's little Johnny Lodge, who used to get us into clubs for free!”

The Moodies were inducted into the Rock And Roll Hall Of Fame last year. Was that an important moment?

When I realised how many people voted for us, it was incredibly humbling. That really had an impact on me. And standing on the stage looking out at the thousands in the venue, I had this thought about here I was standing shoulder to shoulder with those who were my own heroes and already in the Hall Of Fame, like Buddy Holly. That's a fantastic feeling. But I will admit that when I was initially told we'd been nominated, it didn't really mean that much to me. It was knowing so many fans wanted us in which was pivotal in my change of attitude.

You called your last solo album 10,000 Light Years Ago. Are you aware, a 'light year' is a measure of distance, not time?

I know. But if you think about it, the light we see these days from the stars is actually thousands of years old. So there is an element of time about it. Besides, if you could travel those massive distances to the source of the light, the chances are you would find nothing. But what we are seeing in the sky represents a bygone period of time. I accept the scientific definition of a light year, but to me it's the time element that matters most.

Are there any plans for you to write your memoirs?

I have no interest in taking on something like that. For me, the past has gone and I am looking forward to the future. I have no wish to tell stories for a book. Besides, how accurate can it be? Unless you kept a diary covering all those years, then you are relying on your memory, which can play tricks on you. If you get five people together to tell the way they recall a certain incident happened, then you will end up with five versions. So, what I would write in a book would be more my interpretation of what occurred rather than the absolute truth. Yes, I have some great stories to tell from the Moody Blues' past. But I would rather tell mates at a party and not any put into print.