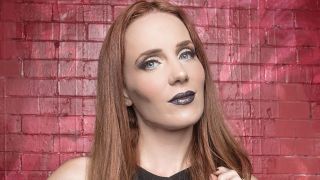 “People might think they know what it’s like and that my life is all very magical, but wait until the day when you’ve only had three hours’ sleep and you’re hanging around an airport for hours and hours… and then, of course, I always get pulled over to have my bags checked for explosives. It’s not so glamorous when you eat bad sushi and get food poisoning, either. The worst time was in Colombia – I was shitting and puking at the same time. I thought I was going to die! Ha ha ha!”

You probably think you know Simone Simons. Vocalist with Epica throughout the Dutch band’s 15-year story, she’s always appeared every inch the symphonic metal ‘princess’: vocally versatile and visually immaculate, it’s hard to imagine her losing her cool at the airport. But then, unless you read her Metal Test in Hammer #300, you may be unaware that she has a bone-dry sense of humour and is more than happy to share, for example, the horrifying details of a nasty bout of food poisoning. As she cheerfully admits, spending 15 years on the road with a bunch of hairy, sweaty men has had an undeniable impact.

“Well, when Epica is on the road I’m in a minority, of course. The guys shouldn’t have to change everything for me, so I have to think like a guy! We’ve toured a whole lot and that’s definitely taken a toll on me. But if I’m missing my family or I’m tired and cranky or there are no clean towels, yeah, being the only girl can be tough. But then you suddenly remember that you made a record and there are people in São Paolo listening to it. There are people with Epica tattoos. It’s a reality check; we’re very lucky.”

Born in Hoensbroek in the Netherlands in 1985, Simone loved singing from a very young age. As a teenager, she fantasised about joining a girl group, even to the extent of starting to write songs for what was, at that point, a somewhat optimistic endeavour. The decisive moment in Simone’s life came at school, when she auditioned for a part in the end-of-year musical. Plainly gifted at singing but, in her own words, “no good at acting”, she was beaten to the part by a girl with no singing ability but plenty of acting talent (“She went to theatre school,” Simone notes with a snort of derision). Fortunately, her vocal skills had not gone unnoticed.

“The teacher wrote an extra part for me, just so I could sing in the show,” Simone grins. “That was my very first show. I was wearing the ugliest outfit ever, which was hilarious, and I sang a song. Afterwards, the teacher said I should get vocal lessons and really do something with this talent, you know? I haven’t seen her since I left that school, but maybe I should go back. I can tell her that everything turned out pretty OK!”

Attending music school from the age of 12, Simone played flute and received classical singing tuition that would prove hugely helpful further down the line, but a life in the world of heavy metal was still a long way off, partly because she had yet to catch the heavy metal bug herself. When the moment finally came, it was almost as if Simone could see her future stretching out in front of her.

“I was more into alternative rock in high school,” she recalls. “My friends were into grunge and bands like Deftones and Muse, but my first boyfriend was a metalhead and he listened to a lot of black metal and symphonic metal. One of his friends introduced me to Nightwish. I realised there was a whole world of bands doing this kind of thing and it completely made sense to me. I heard Lacuna Coil and I absolutely loved them, too. I loved the combination of the female voice with metal. It was such a beautiful contrast.”

Today, Simone is a veteran of the metal touring circuit, but when she accepted her then-boyfriend Mark Jansen’s offer of the vocalist job in his new band Epica, she was still at high school and pondering her place in the world. Mark had recently quit his previous band, After Forever, but was sufficiently well known and respected that his next move was sure to generate a lot of interest. Beyond that, however, she had no reason to suspect that joining the band would lead to such a substantial career.

“I was still in school, wondering what I was going to do with my life,” she shrugs. “I studied, of course, and I was doing good but I didn’t have a plan. I don’t think I was necessarily ready for it, but it was just the right time. It was some kind of calling and a once-in-a-lifetime opportunity. I grabbed the chance and I joined the band, and we’ve spent the last 15 years travelling the world together. I made the right choice, I think.”

Given how successful Epica are right now, she clearly has a point. But Simone also admits that her life has been a strange one and that she has effectively grown up in the spotlight.

“I was 17 when it started and I just grabbed hold of Epica and ran with it. But I’ve worked really hard and it’s a job, you know? It’s not just 90 minutes of being onstage. There’s so much more to it and I didn’t know any of that before I was in the business. Only a small amount of people can live from being musicians, especially in the metal scene. I don’t take it for granted.”

From the release of their debut album, The Phantom Agony, in 2003, Epica’s rise to prominence has been slow and steady but unrelenting. With bands like Nightwish and Within Temptation paving the way and proving that huge commercial success is feasible for music of this kind, Simone and her comrades have increasingly looked like next-in-line for arena- bothering hugeness, despite being considerably heavier than most of their peers. In particular, the band’s last two albums, The Quantum Enigma (2014) and The Holographic Principle (2016), have propelled them to new heights of popularity, resulting in bigger shows in bigger venues and a growing sense that Epica have become an unstoppable force. Away from the stage, however, Simone also has her responsibilities as a mother to contend with. Her son Vincent was born in 2013, and while she’s clearly taken that huge change in life circumstances in her stride, she admits that she’s occasionally looked to her fellow female vocalists for friendly advice.

“Having kids changed everything, so of course I talk to other mothers in the same situation,” she nods. “We recently toured with Anneke van Giersbergen and she’s been through all of it, too. She’s learned how to combine a family and touring, with all the pros and cons. We were giggling about having the same problems and same funny situations, and it’s nice knowing you are not alone with those thoughts sometimes.”

As comfortable as she is with spending a large amount of her time on a tourbus with her male bandmates, Simone cheerfully admits that she’s happiest when Epica are on the road with another band with a female vocalist. Listing Anneke, Lacuna Coil’s Cristina Scabbia and Nightwish’s Floor Jansen among her friends, confidants and occasional collaborators, she sings their praises for being allies in a largely male-dominated environment.

“I’ve always enjoyed touring with other female singers, because I can hang out with them and do the girly stuff that the guys don’t like me to do. I’ve always found those ladies inspirational, and I’m proud to say that some of them are my friends and sometimes I get to work with them. That’s a beautiful thing.”

It promises to be yet another prosperous year for Epica. They will play their 1,000th show in Tilburg, Holland, at the end of their forthcoming UK tour, a fitting climax to a world tour that’s added yet more fuel to their fire. Simone is enjoying every minute of it, but with her feet planted firmly on the ground. This symphonic metal princess is tougher than the stereotype and in it for the long haul.

“You sacrifice a lot to be a successful musician. You’re away from your family and friends and you miss their birthdays. I still get angry looks from my mother when I go home. Sometimes it feels like we’ve been on a high-speed train for a long, long time. The sky’s the limit, of course, but we’ve already achieved so much. We treasure it all and we have to keep aiming higher because Epica is not just some little garage band anymore. But we can’t push it too hard. If I’m honest, we’re already working our asses off! Ha ha ha!”

The Holographic Principle is out now via Nuclear Blast. They play a Hammer-sponsored tour in April