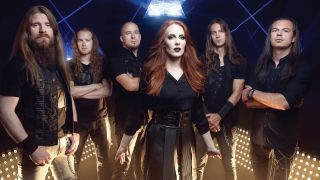 Straight-up prog, Epica are not. But a career-defining gig supporting Anathema was a telling sign of their nascent ambitions to serve up something a little unexpected.

“I sang in a choir when I started Epica,” explains their flame-haired mezzo-soprano Simone Simons. “I was doing a show with the choir but I also had a show with Epica that night, so I had to leave halfway through the show to be on time for sound check. That was our very first official show and we were the support for Anathema.

“They were truly nice people!” she says of the UK prog stars. “I was piggyback-riding one of the twins and fell in love with their music afterwards. Now one of my favourite albums of all times has to be Judgement.”

In simplistic terms, the Dutch symphonic group are a harder-edged sister to Nightwish, churning up a satisfying blast of ear-shattering bombast for those lusting after the experience of a full orchestra coupled with heavy riffing. They apply a painstaking approach to songwriting, blending goth, power and progressive flavours to enrich their sound, throwing in mind-expanding concepts steeped in psychology, science and philosophy, which push them to the very end of the sensory overload.

After a brief trial with Helena Michaelsen of Trail Of Tears, Epica – then known as Sahara Dust – opted to go with the then-unknown Simone Simons, a passionate singer who grew up listening to Radiohead and Nightwish, and who also happened to be founding member Mark Jansen’s girlfriend at the time. They assembled a choir and a small string orchestra, and were quickly snapped up by Transmission Records. They then released their debut album, The Phantom Agony.

“Epica was a continuation of Mark’s involvement in After Forever,” says Simons. “He just wanted to continue to write his music and that’s the style he writes. But throughout the years we’ve had new band members come in and because of their influences, their style and the way they’ve contributed to the songwriting, Epica has evolved. Isaac [Delahaye, lead guitar] and Ariën [van Weesenbeek, drums] come from a band called God Dethroned who play death metal, so because of that we got heavier.”

The Phantom Agony is a polished and explosive affair. Dramatic and carefully arranged choirs, lyrics about organised religion, tinkling piano and the ‘beauty and the beast’ aural chiaroscuro of soprano Simons and Jansen’s death growls made this an impressive debut, but not without critics claiming that the band were an After Forever clone. But compare it to the band’s most recent effort, 2016’s The Holographic Principle, a head-on collision of metal’s dark underbelly and the end-of-the world thundersmack of classical influences like a steroid-fuelled hybrid of Rick Wakemen’s Journey To The Centre Of The Earth and Danny Elfman’s soundtrack to Edward Scissorhands, and there’s little doubt that Epica have come a long way since their debut.

While latter-day Epica achieve the aspirations that they had when they first started out, their live album The Classical Conspiracy was their most ambitious opus in the purest sense of the word. Six years into their career (which in band years is normally just enough time to find your footing), they coupled up with a 40-piece orchestra and a 30-piece choir to record a live album in Miskolc, Hungary during the Miskolc Opera Festival. This in itself was a brave undertaking, given that the visitors are more likely to have a shelf full of Verdi and Puccini than heavy metal.

Taking on familiar classical and film music, from Verdi’s Dies Irae and Vivaldi’s Presto to John Williams’ The Imperial March from Star Wars: Episode V – The Empire Strikes Back, it put a big fat middle finger up to classical purists while simultaneously cementing their proficiency as symphonic diehards. If you want to understand what puts the ‘epic’ in Epica, just listen to Montagues And Capulets, complete with thundering death metal drums, slaughterhouse strings and a big-budget brass section.

Simons acknowledges that one of the differences between Epica and their peers is their heavier edge.

“Even yesterday, I was looking at our audience and they are very diverse,” she remarks. “I think because Epica have become a little bit heavier, we’ve moved into the heavier side of metal. It’s a nice thing we’ve achieved; I think we are accessible for a lot of metal fans, not just symphonic metal fans, because there are a lot of influences in the band. I’d say the base is metal but we have a huge dose of symphonic sounds, and also some death metal, some black metal going on, some progressive metal and even doom metal. Our bass player makes sure we have some of those doomier songs, and then Ariën and Isaac add some black metal to it. It’s become really diverse and it’s become one of our strengths.”

A decade ago, thanks to Nightwish’s continuing success with Anette Olzon, particularly on Dark Passion Play, and Within Temptation’s bombastic live album Black Symphony, not only was female-fronted symphonic metal in rude health, but orchestras were de rigueur. The darkly dramatic approach to this style of music provided a base for Epica to grow and prosper. In 2007 they released The Divine Conspiracy, the same year as Dark Passion Play, proving that it was possible to up the ante on their already monolithic answer to symphonic sounds. The riffs got heavier, Jansen’s death growls became more prominent and Simons dialled her vocals up and away from the measured operatic turns on 2005’s Consign To Oblivion, probably all as a reaction to the recruitment of then session drummer van Weesenbeek, whose blitzrieg attack on percussion set a new precedent for the group. With a good slab of the The Divine Conspiracy’s songs lasting over seven minutes, harnessed around tempo-challenging avenues, chaotic choruses and spats of Dream Theater-esque fretwork, and an enormous 13-minute closer concluding their first concept album, which explored ideas of organised religion, it might not have been a prog album in essence, but the components were very much progressive.

The period between 2007 and 2014 was the making of the present-day Epica, as they continued their rhapsodic conquest and committed themselves to touring hard and working harder. Then 2013 saw the release of Retrospect, their third live album, this time with a 70-piece choir.

“We already knew the Hungarian choir from The Classical Conspiracy,” Simons explains. “So for Retrospect we used the same people. To be honest, it was a hassle to get them all over and to write all the scores. It’s a great project that drains your energy but gives you a lot back, because it’s how we intended the music to sound. It’s just impossible to do shows like this for every gig, it costs too much money and is too much to organise.

“But it’s definitely one of my favourite things to do, to work with a real orchestra. Also, that feeling of having 70 pairs of eyes poking in your back is something you never really have, and that’s pretty cool.”

She adds: “With Retrospect we were looking back over our whole career, but now we thought, ‘We are going to mix things up, we’re going to do it differently.’ We had a new team, a new studio, we were inspired to reinvent ourselves, and that’s how we got to The Quantum Enigma [2014], but even that album was hard. I was writing lyrics and recording vocals right after I gave birth to my son and I had him with me. I was not sleeping at night but I had to sing five or six hours a day with very little energy. I don’t remember that much from the time because I was running on such little energy, but I made it. I was very close to a nervous breakdown, but that’s a symbol for me of how strong I am and how deep I can go.”

Produced by former After Forever keyboard player Joost van den Broek, recorded at Sandlane Recording Facilities in The Netherlands and mixed by Jacob Hansen, The Quantum Enigma explored quantum physics and questioned reality versus illusions. Slick, balanced, melodic and not forgoing many of the progressive tropes that cropped up in their back catalogue, but with a more digestible and modern veneer, it carved a new mature path for the epic titans. This path has helped them to land main stage billings on festivals and also the Epica-curated festival Epic Metal Fest, that’s included bands like Katatonia and fellow Dutch proggers Textures.

For the past two years Epica have been unstoppable: the proof was in a nearly-sold out show at London’s Shepherd’s Bush Empire in support of their latest release, The Holographic Principle.

“With each record we evolve and try new things, and whichever songs the guys write will be the new sound of Epica,” says Simons.

But anyone thinking that success can only come with simplifying songs is mistaken. Just listen to the syncopated tempo trickery of Edge Of The Blade, a grandiloquent skip-hop barrage of finely balanced Epica ingredients. And as for the album’s concept? Well, they haven’t scrimped there, either.

“Mark connects to the Mayan culture,” explains Simons of the album’s bigger themes. “He loves to read about science and the lyrics have always been very spiritual and very philosophical, pointing towards extremism in religion, society, politics and writing about near-death experiences. When it comes to The Holographic Principle, there’s a theory that we live in a hologram. We use virtual reality glasses to make people realise that artificially simulated reality looks so realistic that we can’t be sure what’s real and what’s not. Mark reads a lot of studies about that, and I’m the one who questions everything; I’m more of a philosopher and he’s the one going after the actual facts. But I think we make a good team like that.”

The Holographic Principle is out now on Nuclear Blast. See www.epica.nl for more information.

How did Epica discover heavy metal?

Epica's track by track guide to The Holographic Principle