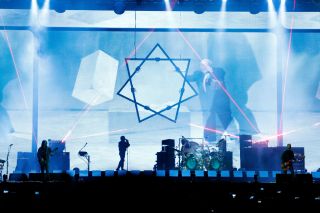 Incase you hadn't heard, Tool are back! The Californian proggy metallers saw out this year's Download Festival and have been playing new tracks during their tour sets. It's a big fucking deal in the rock music world, but we'll forgive you if you aren't so familiar with the band – the guys have been missing from the scene for over a decade. So unless you were initiated into metal before 2006, you might be left bewildered as to what, who and why they are so significant.

Aside from catching up on their entire back catalogue – a birdie tells us they might be hitting the streaming services very soon (yes, they really are that far behind) – here's why you should be ecstatic about their return.

Okay, so he’s adapted some of the songs to suit his range and technique in 2019, singing lower instead of higher, but man /that voice/. Flitting between whispering, chanting, screaming and full-on clean melody, it’s one of the most versatile and recognisable in alternative music. Yes, we’ve had Puscifer and A Perfect Circle, but we’re not exactly gonna say no to more Maynard and more Tool, are we?

Not content with simply getting onstage and playing, Tool invest in their production, creating trippy visuals and playing around with screens and lasers to transport you to another world where your brain is in another dimension, and another dimension is in your brain. It’s an immersive experience - and an enjoyable headfuck.

Their sense of humour...

Who else has a digital laser clock counting down to their encore? Who else performs in wigs? Who else has a dry sense of humour that verges on the surreal and the critical? Whether it’s onstage, online or in those cerebral lyrics, Tool have a certain brand of wit that isn’t found in any other band.

Maynard’s ‘no photos’ policy is notorious. Hold up your screen and you’re likely to be thrown out, so all those memories of seeing your favourite band have to be stored in your tiny, fried mind instead. There’s something to be said for a band who stick to their guns and want to recreate an old-school gig experience and sharpen attention spans. And for A Perfect Circle shows and recent Tool shows, he’s relaxed the rule for the final song anyway.

The big one. Thirteen years, people. Thirteen years! Judging by new songs (labelled by fans) Descending and Invincible, it’s going to be multi-layered, percussive and difficult to decode. In other words, classic Tool. That false ending in Invincible really gets us, too. We can’t wait for August 30 and the big reveal. Will there be interludes, deep philosophy, weird time signatures and some wtf moments? Fingers crossed...