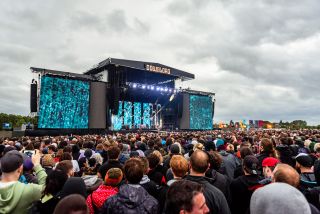 As the sun sets behind heavy clouds, Download is bathed in a weird silver twilight. On giant screens flanking the main stage, and on five panels at the back, arty visuals fill the eyes stereoscopically while Tool play some of their best-known songs on UK soil – Donington soil – for the first time in 12 years.

For some here, this is a religious experience; Tool inspire a certain type of obsessive devotion among their fans, who have been awaiting their return with bated breath. For others, it’s an introduction to a band who have been out of the limelight for so long, they’re not even on streaming services.

They open with Æenima, inspiring a collective cheer. Maynard James Keenan, sporting red trousers and a Mohawk, rocks backwards and forwards at the back left of the stage. It’s noticeable how much more visible and exposed he is in an daylight festival setting, compared with their shadowy arena shows. There’s also more immediacy - instead of playing Parabol, they launch straight into the mind-bending riff of Parabola. It’s the pay-off without the teasing.

While screens usually show the onstage action for festival-goers to watch at a distance, tonight they’re given over purely to their phenomenal visuals. During the song fans have named ‘Descending’, a giant pyramid materialises behind Danny’s kit and yellow lights beam down, evoking the drama of the natural world while the wind whips through Download’s field. They might not have the laser effects from the arena run, but the outdoor environment brings a different dimension to the trippy atmosphere.

Other new song ‘Invincible’, accompanied by psychedelic renderings of a strange skull/foetus with bared teeth, continues to confuse crowds with its false endings and will take some bedding in. But the most enthusiastic responses are unsurprisingly reserved for the songs people know and love - Schism, Forty Six & 2, Vicarious.

Maynard’s voice is still one of the most distinctive in our world, ringing out richly - especially during Schism’s goosebump-raising, unrestrained scream of release. Danny is a monster, covering every inch of the kit seemingly effortlessly, while Adam and Justin wordlessly lock in with each other. As with the Tool of old, the focus is on the experience, rather than the individual. And what an experience.

On a bill featuring the classic party rock of Def Leppard and the pummelling assault of Slipknot, it’s unclear whether Tool have made any new fans. But for the faithful, this is a dream show. The payoff for their patience. A reassurance that their favourite band have still got it. Closer Stinkfist ends the set and Download on a heavy high, and a sense that August 30th can’t come soon enough.