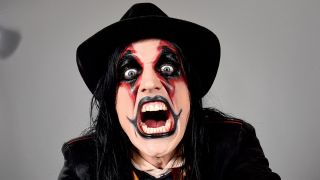 It’s two days before Halloween, in 2011. Backstage at a small venue called the The Tivoli in Helsingborg, Sweden, Avatar are getting ready to debut their new image. Singer Johannes Eckerström pulls on a filthy white tank top and puts the finishing touches to his black, Joker-style facepaint, giving him the look of a demented ringmaster. It is meant to be dramatic, theatrical, incredible.

“We marched onstage, people laughed and I panicked,” he recalls today, reliving the feeling. “I felt the sensation of public speaking in school, or a mean girl saying a mean comment. I didn’t expect it. But now I expect it. Of course I do – I’m a clown!”

Since that day, Avatar have taken their travelling freakshow to venues around the world, and are steadily becoming an underground sensation. The cult of personality around Johannes has built so much that fans dress up as him, and give him dolls they’ve made in his image. In a world where true showmanship is rare, he is a flamboyant figurehead, keeping the spirit of artistic expression alive – current album Feathers & Flesh even comes with an illustrated companion storybook.

Onstage, he can be found twirling his cane and whipping the crowd into a frenzy. Offstage, he is quietly self-assured and geekily intelligent. He’s become accustomed to the laughing, and even embraces it, but insists that Avatar are anything but a gag.

“We’re very serious,” he says. “There’s a huge difference between being fun and being a joke. Even if I tell a joke, we’re not a joke. We care a lot about what we’re doing, and we want to do the best we can.”

Johannes grew up in Lindome, south of Gothenburg, as the middle of five kids. His parents would listen to classical music, and at five years old he wanted to be a conductor. He’d stand on a chair and wave a spoon around to Beethoven. Then he began learning the piano, and later the trombone. At eight years old, his dad played him The Beatles, shifting his perception of music forever. “I heard I Am The Walrus and it was the first time I thought a song was creepy,” he explains.

At school, he was friends with the “weird kids” who liked video- games, pro-wrestling and manga, but went through a “lonely period” when he was 13. Around this time, he heard Blind Guardian, Helloween, Gamma Ray and Rhapsody drifting out of his brother’s room. In the car on a family holiday, he plucked up the courage to ask him if he could borrow an album, and was handed Helloween’s 1988 power metal epic The Keeper Of The Seven Keys: Part II. “That was the moment everything changed,” he marvels. “I got a kick out of the fantasy feel. The whole vibe was of this magical world to escape to… I felt empowered. It gave me the urge to do something epic, and that quickly translated into the idea of doing music as an epic thing. I felt like I’d found my music.”

Enthused, Johannes began connecting with new people at school – “fellow metalheads, with Dungeons & Dragons sprinkled on top”. When he was 14, he became a singer in a rock covers band, took up guitar, and then joined a funk band called Classic Molly as their vocalist. A couple of years later, he met Avatar drummer John Alfredsson, who tried to teach him Clayman by In Flames. “My audition was basically that I was the only kid on the street who could say, ‘Argghhhhh!’” Johannes laughs today.

His fate in Avatar was sealed after a drunken epiphany watching Iron Maiden in Stockholm. “A friend’s brother bought us beer, we got hammered, and I thought, ‘You know what? Fuck funk! I don’t love it. My hair is getting longer, I have my Ozzy t-shirts, I want to get a sword and kill dragons, and the other part of me wants to take that sword and stab the desecrated body of Jesus Christ,’” he jokes.

Early songs were influenced by the melodic death and thrash bands on their doorstep, particularly The Haunted, but Avatar became annoyed with the comparisons to In Flames. They added classic metal influences for 2009’s self-titled album, and industrial for 2012’s Black Waltz, when their sound began to click. This was also when they accidentally hit upon their circus image. Inspired by their song Let It Burn, they had arranged a photoshoot showing Johannes standing in a lake of fire, and had hired Bryce Graves from America’s Hellzapoppin Circus as a pyrotechnician. When they realised the extent of his sideshow skills, they cast him in the video for Black Waltz, but Johannes needed to fit in with him aesthetically. The clown image was born. “The make-up girl did my face. I looked in the mirror, and it clicked,” he remembers. “It was as if it had been waiting for us, and it reminded me of pro-wrestling. It helped me grow into my own way more onstage after that. We just got lucky.”

After the disappointment of that first show, the band began to settle into their new look, though Johannes admits it took another couple of tries before he “began to enjoy the ride”. Despite his disguise, he felt more vulnerable onstage than ever before, and needed to grow into a new style of performance.

“It drove a new level of self-consciousness,” he explains. “I put a big bullseye on my face. It’s strange, because I was always singing, always standing in the middle of the stage, the guy who spoke between songs, but still I was more hidden between different types of tropes. Since this is not black metal corpsepaint, there were no given tropes for how I was supposed to behave. So the process has been about exploring.”

He would get ready hours before the show, to make sure the production was perfect. The way he speaks reveals a level of intensity that’s at odds with the band’s over-the-top, carnivalesque image. “We can talk about hats, canes or our shoes, but it all starts with the music,” he states. “We don’t just compete with other metal bands – we take ourselves seriously as musicians. We want to compete with any classical orchestra or jazz trio or metal band out there, and we’re hard on ourselves when we make mistakes.”

Another unexpected challenge was learning to cope with fandom, and to mentally separate his onstage avatar from his real-life image. “I’ve lost count of how many times I’ve seen my face tattooed on people,” he says. “At first it terrified me… then I realised, it’s me in this role I have as singer of Avatar, working double shifts. What Eddie is to Iron Maiden, I am to this band.”

Yet his personality remains the same. He spends a lot of downtime relaxing alone, but speaks with wonder about being paid to dress up weirdly and jump around, getting to express the part of himself that only comes out in front of an audience. “It’s not Alice Cooper – it’s not an alter-ego. I’m not Clown McClownsome from Clownsomeville. I’m still Johannes Eckerström from Lindome,” he offers. “It’s me, between certain hours per day. When you dress up nice for going out on a Saturday, is that the same you as the one on a hungover Sunday? It’s you.”

With the earnest nature of power metal welded to the roots of melodic death metal and a leering clown for a frontman, Avatar feel like a band out of time. Feathers & Flesh is a concept album telling the fable of an owl battling an eagle, complete with creepy whispering, organ-style keyboard parts and nods to multiple classic metal bands. Johannes cites Queen as an aspirational reference point for a band who were never “in style”, but in today’s musical climate it’s a gamble to do something this niche and expect widespread success.

“If the question is, ‘How big can we be?’ then you start looking for shortcuts,” he says. “If I wanted to make the biggest money-making song ever, that would mean moving away from metal. We wanna be bigger, but we can’t fake it. Sustainable success comes when it seems real to the person doing it. I have no problem with the band crashing and burning because everybody hated our next album.”

The make-up may be fake, but Johannes is for real. He is living that early fantasy of escapism every day, while respecting the idols that have shaped his life. Bookish and self-aware, he is super-serious about fun. “What I do is aggressive, intensive and hopefully pretty epic, but it’s also kind of funny,” he admits. “We like the circus life, we like showbusiness, we like putting on funny hats – we want to create a spectacle.”