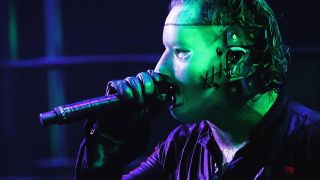 On the back of a successful return to form with last year’s We Are Not Your Kind, Slipknot's first number one record here in the UK since Iowa nearly 20 years ago, the 'Knot rode into London to perform their biggest ever headlining show in the British capital on Saturday January 25, 2020.

An evening witnessing one of the biggest metal bands of all time, on a commercial and creative high, bringing Polish blackened death metal superstars Behemoth along from the ride? Obviously, there was no way we were going to miss this. Here’s what we learnt on the night.

1. Slipknot are probably bigger than they’ve ever been

The O2 Arena is almost certainly the most prestigious indoor venue in the United Kingdom, many sizable acts have tried, and failed, to fill its gargantuan frame. Not so Slipknot, tickets in the buildup to the show are like gold dust, and when we get inside the arena just before they arrive it’s breathtaking to see just how many people are here to watch a band that have so often pushed their sound into the most extreme areas of metal. This is no media spin, when a Slipknot show says ‘sold out’ it means ‘SOLD. OUT’.

2. Aren’t Behemoth just meant to be the support band?

Before the main event we get a dose of Behemoth, who are billed as special guests, but the sheer size and scale of their stage set makes it look as if this is some kind of co-headline bill. It’s the full stage set that the band took out on their headline tour last year, and none of the pyro, lights, sound or drama has been scrimped on or compromised at all.

If you’d walked in with no prior knowledge of the show you’d have easily mistaken it for the headliners. It may take a song or two to adjust your ears to the sound of such an extreme band playing in a venue like this, but once it does this is an incredible performance from Nergal and Co.

To see circle pits forming and the crowd chant back to the band during a stunning Blow Your Trumpets Gabriel is a sight to see. Behemoth leave with a triumphant run through the incredible grind of Chant For Eschaton 2000 E.V. and the full arena erupts. For some, this will be their first time witnessing or even hearing a band like Behemoth, and the dropped jaws of thousands of newly converted fans speaks volumes.

3. Unsainted is a beast of a way to start the show

People = Shit, The Blister Exists, Disasterpiece. Over the years Slipknot have chosen some absolute stormers to open their sets but Unsainted is surely one of the best. That choir, that monstrous chorus - the We Are Not Your Kind single is The Nine at their most unapologetically anthemic. For the crowd, “IM JUST WEATHERING A ROUGH PATCH” is the new, “I DID MY TIME” from Psychosocial.

4. They're not afraid of a cliche or two

The intro tape is AC/DC's For Those About to Rock (We Salute You), and the band take their bows to the strains of Monty Python's Always Look On The Bright Side Of Life. It isn't the first time either song has been used under such circumstances, and it won't be the last. But it doesn't matter. Both work, and that's enough.

When Corey Taylor delivers an impassioned speech about the Slipknot 'family', you just know he's doing it every night. "This music brings us all together," he says. "From all walks of life, from all different countries, from different languages, different skin colours... all of it fades away. And that is something you cannot fake."

Yeah, it's predictable. Yeah, he'll say the same thing tomorrow. But he's not insincere, and the roar that greets the speech suggests there's a lot of believers in the room.

6. Slipknot can get intense

There are moments when it all comes together with the kind of pure ferocity very few bands are capable of. After the Sabbathy breakdown in All Out Life, the song slowly winds back into gear and eventually explodes with merciless intent.

Riffs fly, drums rattle, flames shoot into the air, the video screens blaze with seizure-inducing images, the sane fear for their hearing, and a circle pit forms ten metres behind the sound desk. It's absolute chaos, but it's also hypnotic. You can feel yourself being sucked in.

7. The Maggots are as rabid as ever

The pits at the O2 are absolute pandemonium. At one point during Wait And Bleed, we counted no less than seven, all the way to the back of the arena. The band’s beloved Maggots still kick off the way the they did back at the very beginning. Whether it’s a crowd of 2,000 at the band’s first UK show or 15,000 strong at one of the UK’s most vast, corporate spaces, Slipknot still incite chaos.

Sid Wilson might not leap about with the same disregard for his health and safety that he used to, but the treadmill has given him a new kind of freedom. Watch Rammstein's Flake onstage and it often looks like he's using his to up the step count on his Fitbit, but Sid's performance is much more artful. He glides, he pirouettes, he slips sideways, he's Jamiroquai's Jay Kay with an extreme metal makeover.

It was always going to be clear that the latest album would feature heavily in a tour promoting said record, and often for metal bands of a certain vintage that can mean fans wandering off for bar or toilet breaks or shuffling around waiting for the next classic to emerge.

Not tonight, from the opening of We Are Not Your Kind’s one-two Insert Coin and the already anthemic Unsainted the new songs all kill in a live environment.

We get a brilliant Birth Of The Cruel, a version of Solway Firth that sees the floor of the O2 bounce to the ceiling and, best of all, that Godzilla sized riff to Nero Forte. But the winner is actually a frankly terrifyingly brutal All Out Life, which might not be on the record, but should remain in Slipknot’s setlist until the end of time.

If there has ever been a criticism of Slipknot’s live show, it would be that the band don’t tend to mix their setlist up enough. Tonight, that is remedied somewhat as the long unheard likes of Eeyore and New Abortion are dropped back into the set. To top it off, Corey Taylor apologises for the band dropping Wait And Bleed from their live schedule for so long before eliciting the biggest mass singalong of the entire night as Slipknot roar through it. Oddly though, nothing from 2015’s .5 The Grey Chapter gets an outing, which seems a little remiss.

11. They've taken some cues from Rammstein

The nine members of Slipknot up onstage causing all manner of chaos is usually enough to make them one of the great live bands of all time. So, add a spinning drum riser here, some flaming baseball bats there and they’re basically untouchable. Tonight, they do have some impressive LCD lighting and more than enough flaming pyro throughout the show.

But they also borrow from everyone’s favourite Teutonic arsonists, in the form of the flamethrower bass that Allesandro ‘VMAN’ Venturella sports at one point, and, as previously mentioned, we witness Sid Wilson abandon his DJ booth for a quick slalom down a treadmill, à la Flake from Rammstein. It all adds to the spectacle that is a Slipknot show.

12. Spit It Out has left a hole in their set

The band’s get down on and the floor and “JUMP THE FUCK UP” at the end of Spit It Out has been the climax of their show for years. It’s their hallmark. It defines their live assault.

So it’s a weird choice of song to scrub from the set. Sure, an incendiary encore of (sic), People = Shit, and Surfacing will do the job, but without that moment of band/ crowd release, something felt missing... not quite complete.

13. But, no band can touch that encore

Twenty-five years into their career, it’s unbelievable to see just how revered Slipknot have become. Corey Taylor calls London the band's second home and asks the audience who was at their legendary Astoria show in 1999. The response is deafening, leading to Corey calling out the Maggots for telling porkie pies.

But the fact that the band of such combustible energy have come so far still remains a miracle of the modern age. The reasons? Well, there are many, but the main one is their songs. As Slipknot leave with a run of Eyeless, All Out Life, and Duality before returning for an encore of (sic), People = Shit and our national fucking anthem Surfacing, it’s clear why they are able to do this.

Those songs are all time great heavy metal classics, untouchable achievements in songwriting, full of everything that makes metal so life-affirmingly great. As Corey leaves he tells us ‘We’ve been coming here for twenty years, if you keep coming out we’ll give you twenty more’, well these songs aren’t ever going to age. So, Mr Taylor, I guess we’ll be seeing you in twenty.