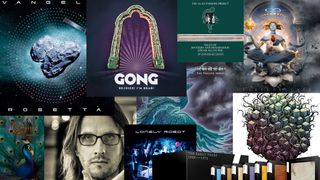 When it comes to new releases, prog fans have already been spoiled for choice this year, and there’s even more still to come. Here are 10 of the hottest up-and-coming releases due out this autumn and winter. Are your favourites among them?

After the success of 2014’s Casualties Of Cool and the epic Z2, the creative Canadian is back with a new release that’ll blow your socks off. But don’t think for one second that Devin Townsend’s gone all hippie dippy; he says the title reflects the way he tackled this album as a band project rather than a dictatorship!

Gong’s first post-Daevid Allen studio album will boldly carry on the band’s psychedelic prog tradition with Knifeworld’s Kavus Torabi at the helm. Also available as a very limited deluxe CD package, this new release is billed as a celebration of Allen’s life. The visionary himself posthumously appears on a couple of tracks too.

Last year’s Polaris was TesseracT’s biggest and most diverse release to date and they haven’t finished experimenting with it yet. Errai contains re-imagined versions of the album tracks Survival, Cages, Tourniquet and Seven Names. It’ll be out on clear vinyl and also as part of a special 2CD tour edition of Polaris.

KANSAS - The Prelude Implicit (out September 23)

Sixteen years after Somewhere To Elsewhere, Kansas are back with 10 brand new studio tracks and an augmented line-up. Although The Prelude Implicit is their first recording for more than 30 years without founding vocalist Steve Walsh, guitarist Richard Williams is promising that the album is still “quintessential Kansas.”

The much anticipated new album from the band that grace the front of our latest issue. Featuring a mere six tracks, three of them gargantuan epics, the album paints a bleak picture of the modern world which prompted us to run with the coverline “You’re all f**ked!”. Still, if anything’s going to per you up, its album already being described by people here at TeamRock as they best ever!

When rumours of a new Vangelis album hit the internet earlier this year, fans couldn’t believe their luck. Rosetta is the Greek electronic composer’s first studio album for many years and has been inspired by the 12-year space mission of the same name. The release date coincides with the culmination of the mission.

STEVE HILLAGE - Searching For The Spark (out October 21)

A massive, career-spanning 22 CD box set that begins with 1969’s Arzachel, recorded when Hillage was in Uriel, all his solo works and the very first System 7 album. Plus a wealth of live discs and four rarities discs featuring a raft of pre-solo career demos. A must for any Hillage fan.

Bumper deluxe box that collates all the ‘Floyd’s pre-Dark Side Of The Moon recordings into a beautifully-packaged 27-disc collection. The Early Years… includes previously unreleased material, rare filmed footage, vintage flyers and replica singles. Selected highlights will also be available on the double album The Early Years – Cre/ation.

Despite a few delays, John Mitchell’s (Frost*/Kino) second conceptual outing under the Lonely Robot moniker is now almost complete and should be out later this year. The 11-track continues the interstellar theme from Mitchell’s debut with the titular astronaut exploring a strange dreamlike world. Craig Blundell (Frost*/Steven Wilson Band) reprises his role on drums and Kim Seviour will make a guest appearance on a bonus duet.