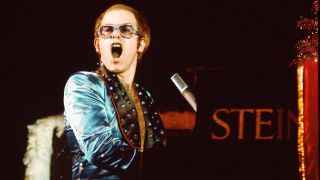 Sir Elton John has lead a storied life. Starting out his career as a virtually unknown piano player called Reginald Dwight, playing with Bluesology – a band that sometimes backed singer Long John Baldry – three years later Reg was known as Elton John, and by 1975 he was arguably the biggest rock star in the world. He was also the first British solo artist to ever break America before having made it in his homeland.

This journey – and much more – is played out in new Elton John biopic Rocketman. Part biography, part "musical fantasy", the movie – which comes from the same creative minds that brought you Queen biopic Bohemian Rhapsody – follows John through the early days of his career and celebrates his incredible back catalogue as it goes.

With a career that's spanned five decades, it's unsurprising that there's a lot to learn about Sir Elton Hercules John. Below, we pick out 12 peculiar facts you might not know about the ivory-tinkling mega-star.

Elton John is fond of a kickabout, and has been a dedicated football fan his entire life – staying true to his local childhood club, Watford FC, since he became a fan. John actually became president, and later chairman, of the club in the 1970s, and again in the 1990s. He apparently still uses his "incredible knowledge of football" to scout players for the team, and was made Honorary Life President of the club in recognition of the work he's done for the team.

In 2014 the club named a stand in their grounds after him, and in 2016, John's 7-year-old son, Zachary, was recruited by the club's academy division for junior players.

Thanks to a bet made in the studio, John Lennon's last live performance was during a concert with Elton John at Madison Square Garden on Thanksgiving day in 1974.

The story goes like this: when John supplied the piano part for Lennon's 1974 single Whatever Gets You Thru The Night, the singer insisted that if Lennon's single hit number one, he'd have to agree to get up and perform with him at his Thanksgiving show.

The rest, as they say, is history, and Lennon wound up singing three songs with John at that concert, including Lucy In The Sky With Diamonds and I Saw Her Standing There.

Tragically, it was Lennon's final time performing in public before his death in 1980.

Queen frontman Freddie Mercury and Elton John were great friends. At Christmas 1991, a month after Mercury’s death, John – known to Mercury as 'Sharon' – received a package wrapped in a pillowcase. It contained a painting by one of Elton’s favourite artists, Henry Scott Tuke, and a handwritten note: “Dear Sharon, thought you’d like this. Love Melina.”

Yeah, you heard us right: Elton John released four albums – Tumbleweed Connection, Friends, the live album 17-11-70, and Madman Across the Water – between October 1970 and November 1971. This fact makes him one of the most prolific songwriters in British history.

Elton John holds the record for the world's biggest-selling single

Elton John's release of Candle In The Wind 1997/Something About the Way You Look Tonight, in tribute to the late Princess Diana, shifted 33 million units and became the biggest-selling single since UK and US singles charts began in the 1950s.

Elton John has played over 3,500 gigs

Elton John didn't get a reputation for being the most prolific man in rock for nothing: over the five decades since his career began in 1969, John has played more than 3,500 live shows in over 80 countries. It makes us tired just thinking about it.

When Elton John became the first Western rockstar to perform live in the USSR in 1979, it made history in more ways than one. For many members of the Russian audience, it was the first example they'd ever seen of the rich, ostentatious westerner, and they mistakenly believed John's fashion choices represented the way all westerners were dressing.

Well, 70s trends may have been crazy, but they weren't quite on a level with John's wardrobe; nonetheless, Russian's famous gaudy luxury industry was born as a result.

When it comes to finding a potential Godfather for your children, it's fair to say there probably aren't many better choices than the super-famous, ultra-rich and altruistic Elton John.

This can probably explain why Elton has a number of Godchildren, including Sean Lennon, son of John Lennon and Yoko Ono and Les Claypool collaborator and Brooklyn and Romeo Beckham, the children of David and Victoria Beckham.

Amazingly, Elton John auditioned for the lead vocalist role in the King Crimson but was turned down. We can only imagine what 21st Century Schizoid Man could've sounded like...

Elton John has over 1,000 pairs of glasses

Elton John's love affair is well documented, with his various flamboyant frames having come to define his style over the years. At last count, John had over 1000 pairs of glasses in his collection. So extensive is his collection, it was rumoured in 2013 that he'd had to rent a whole separate hotel room just to house his glasses. John has denied this claim.

Elton John can count Madonna, Lily Allen and the late David Bowie among his celebrity rivals – but it's Rod Stewart with whom he shares the biggest and tastiest beef.

When Stewart launched a load of balloons into the sky to promote one of his concerts, John responded by hiring a sniper to shoot the balloons down. Then, later, when Rod unveiled a huge banner for his Blondes Have More Fun Tour, John erected a banner on a building across the street that said, “But Brunettes Make More Money.” It's the sort of dedication to petty beef that really needs to be applauded.

Elton John and Bernie Taupin were both record label rejects

Elton John's songwriting partnership with lyricist Bernie Taupin is well-documented, but a little known fact is that they first met after they both failed an audition for Liberty Records.