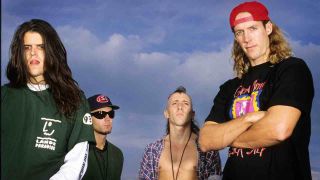 No one wants to waste their time listening to a bad album, and even metal’s greats have come up with some stinkers. Metallica have St Anger, Megadeth have Supercollider and Black Sabbath have Forbidden. This is why it’s so impressive when artists pull off the perfect streak, only ever releasing quality music. Below are eleven geniuses who have done just that.

For this list, we’re only including bands that have made five or more albums, but we’re also focussing on quality over quantity. Making five perfect albums is better than making eighteen average ones, right?

When Tool ended their 13-year dry spell with Fear Inoculum in 2019, the prog metal heavyweights secured themselves a streak of five back-to-back powerhouses. Listening to their back-catalogue chronologically, you can hear the Californians evolve, starting with Undertow’s intellectual grunge and concluding with their latest and its corpus of up-to-16-minute-long epics. With each new album, Maynard and co have only ever upped the ante.

When people think “Great At The Gates albums”, their minds usually go to Slaughter Of The Soul, 1995’s melo-death magnum opus. However, the Swedes’ other four albums are brilliant as well. Whether it’s with the straight-ahead brutality of The Red In The Sky Is Ours and With Fear I Kiss The Burning Darkness, or the modern sophistication of At War With Reality and To Drink From The Night Itself, you really can’t go wrong.

Unlike other bands here, where every album is strong but there are still some undisputed highlights, people are always torn on what the best Isis release is. Is it debut Celestial, which helped define post-metal? Is it the cinematic Oceanic? The more refined Panopticon? Is it Absence Of Truth and its clean singing? Or how about the bittersweet swansong, Wavering Radiant? No one knows, but one thing’s for certain: they’re all fucking awesome!

Carcass are preeminent heroes in multiple subgenres. Their first two albums were beloved parts of the ‘80s grindcore scene, while the ‘90s’ Heartwork and Swansong proved key in shaping melodic death metal and death ‘n’ roll respectively. Not even a near-20-year hiatus could stop the Brits, since comeback Surgical Steel melded all of their prior successes into one morbid melting pot.

When The Dillinger Escape Plan called it quits in 2017, guitarist Ben Weinman said they did so because they wanted to go out on top and at their peak. And, considering they left behind a spotless record, it was mission accomplished. Dillinger’s six albums are all erratic and experimental metalcore masterpieces, with not a weak link among them. Where do you start with these geniuses? It almost doesn’t matter, since you’re pretty much guaranteed to love it.

All of Alcest’s music exists on a spectrum. On one end is beautiful shoegaze; on the other, raw black metal. For six albums, Neige and his cohorts have been exploring the territory between those two poles, making themselves constantly unpredictable. And the best part is, whether it’s with the serenity of Shelter or Écailles De Lune’s concise melodies, the Frenchmen always shine. As gorgeous as they are heavy, Alcest are just perfect.

Gojira’s intense, pulse-pounding approach to technical death metal has never grown old, as proven by all six of their albums. Each of them – barring the emotive and introspective Magma – is full of destructive crescendos, powered by titanic riffs and breakdowns. Every song brutalises, but also has an understanding of melody, as felt in sublime cuts like Gift Of Guilt and Oroborus. Hell, even their EPs range from good to genius.

Uniting metal and punk in the most volatile of ways, Converge have been a worldwide attraction since their 2001 breakthrough, Jane Doe. It’s now hailed as one of heavy music’s finest moments, but the band’s albums both before and afterwards still hold up against it. Whether you go old school with Halo In A Haystack or use The Dusk In Us to keep it recent, you’re guaranteed metalcore of A* quality, never dull and always pissed off.

Over eleven albums, Gothenburg’s Dark Tranquillity have been testing the limits of melo-death, imbuing the genre with goth, tech-metal and power metal. As a result, their discography is infallible and always dynamic. While The Gallery is an awe-inspiring shredathon, Projector is a hyper-catchy triumph and Atoma is filled with chilling lament. They aren’t as popular as At The Gates or In Flames, but Dark Tranquillity are the most consistently masterful Swedish death metal act.

How is it even possible for a band to make 13 fantastic albums? It shouldn’t be, yet My Dying Bride have pulled it off. They’ve been masters of doom metal for 30 years, taking it to new heights with string-orientated compositions and operatic structuring. Songs from She Is The Dark to Your Broken Shore will always be epic, and even their deviations from formula (see 34.788% Complete) maintain enough grandeur to work amazingly.