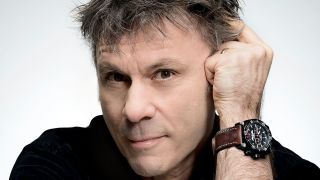 Iron Maiden frontman Bruce Dickinson is releasing his long-awaited autobiography What Does This Button Do? on October 19 and we’ve been lucky enough to give it a read already. In fact, in the new issue of Hammer, we have an exclusive excerpt from the book and an exclusive interview with Bruce himself about his life and what it takes to front one of the biggest bands in the history of music.

In What Does This Button Do? Bruce relives his childhood, the early days of Iron Maiden (and subsequent 30 years of world-beating success), his solo career, his recent battles with tongue cancer, and much more. There’s a lot on the mind of Iron Maiden’s enigmatic frontman, so we’ve picked out ten nuggets from his autobiography that even most ardent fan might not know.

He was in a band called Speed

They were so named “’cos we play too fucking fast”, and their gigs involved the disembowelling of a large Snoopy toy.

He’s not a fan of swimming

“I am one of nature’s sinkers,” Bruce says. “‘Relax!’ cry the floaters, but sadly my feet go the way of gravity and the rest follows suit.”

He was sick on his hero

When Bruce met rock legend Ian Gillan, he foolishly took a few drags on a joint and threw up everywhere. Much to Gillan’s amusement.

His first gig was weird

The first band Bruce ever saw live – while “out of my mind on Fanta and Mars bars” – were obscure 70s hard rockers Wild Turkey.

He’s trained with the best

Bruce’s exploits in competitive fencing began well when he took lessons from a man that had taught swashbuckling movie legend Errol Flynn.

He was destined for Maiden

When he first saw them live, in 1979, Bruce immediately decided that he was destined to be Iron Maiden’s singer. A year later, he was.

He has several chipped teeth

These are a result of early territorial battles with Steve Harris, who would run “full tilt” into the singer’s mic stand.

During one of Maiden’s Donington headline shows, Bruce spotted “a fully formed, inverted sherry trifle” that some scamp had lobbed on to the stage.

He trained for combat

His dress sense was always iffy

Bruce Dickinson’s autobiography What Does That Button Do? is out October 19 via Harper Collins and is available to pre-order now.

You can read the our exclusive interview and the exclusive book excerpt right now on TeamRock+.