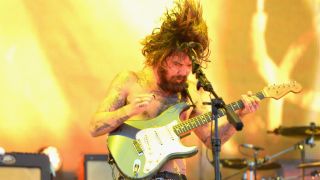 Biffy Clyro hit T In The Park tonight as headliners on what will be their tenth appearance at the festival: in its 21 year history, no other band has played T in the Park more. There are many reasons why you need to see Biffy headline festivals. Here are 10 of them....

BECAUSE THEY FOUGHT THEIR WAY TO THE TOP

Back in 1999 the then-teenagers had to play a series of gigs organised by Glasgow venue King Tut’s Wah Wah Hut to be in with a chance of playing the festival’s T Break Stage for unsigned bands. They won, played at midday, broke all their gear (and frontman Simon Neil broke a finger) and then, according to Neil, spent the next twelve hours “taking things you shouldn’t take” and running amok backstage. Off the back of that show they signed their first record deal.

Back when they played Reading/Leeds in 2010 Neil turned up on what is traditionally one of the hottest weekends of the British summer looking like a Viking who had just been chipped out of a block of ice in the Arctic Tundra and shipped south to pillage old Albion. Or, put another way, a Game Of Thrones character. Bleached hair is one thing but bleached beards? Such dedication to reinventing the limited possibilities of face fungus must not only be applauded but actively encouraged.

BECAUSE OF THOSE GORGEOUS THREE-PART HARMONIES

Covering songs during their early years, drummer Ben Johnston found himself taking the high notes and with the addition of backing vocals from bassist brother James, Biffy realised they were capable of pulling off the difficult task of three-part harmonies, as best heard on Stingin’ Belle and their biggest UK single, Mountains.

BECAUSE THEY’VE NOT SACRIFICED THEIR WEIRDNESS FOR SUCCESS

Odd time signatures, cryptic lyrics and screaming wig-outs are how early Biffy made their mark on the world – and though capable of headlining festivals those motifs are still in place. There’s No Such Thing As A Jaggy Snake still gets an occasional airing and recent track Sound like Balloons is about as odd as arena-rock gets. As is the fact they come onstage to Sister Sledge’s We Are Family.

BECAUSE THEY’RE DEFINITELY NOT THAT ‘X FACTOR SONG’ BAND

Get it right: the guy whose name we’ve long forgotten is actually the “Biffy Clyro song bloke” rather than the other way round. The licensing of the Biffy ballad Many Of Horror to Matt Carpe Diem, or whatever his name was, did however make Simon Neil the highest earning British songwriter of 2010. Given some of the band were doing odd-jobs between tours only five or six years earlier, that’s quite an achievement.

BECAUSE THEY DO COOL COVER VERSIONS

Biffy are no snobs, and their catalogue of covers runs the gamut of modern music, taking in tunes by Franz Ferdinand, Rihanna, Rage Against The Machine, Daft Punk, Ciara, Vampire Weekend and Starship. Perhaps their best cover is a frantic reinterpretation of Weezer’s 1994 hit Buddy Holly, in which the song (which featured parts from discarded Biffy track The Ghouls of Bymbombidor) is pummelled into submission, shot to pieces with machine guitars and then buried alive beneath an avalanche of drums while a hairy man barks order at it.

Never ones to rest on their laurels, Biffy have been writing new songs for their forthcoming album, their seventh. Having fulfilled their promise of releasing “three big rock albums”, a new direction beckons. “I’ve written the first ever black metal pop song,” Simon Neil explained. “Seriously. It has full-on blast beats but a sweet pop melody over the top. There’s also reggae/stoner song, an eight minute piano piece…these may not actually make the next album but we do know that we’ve done the big, bombastic monster rock records and this next one is definitely going to be stripped-back and uglier.”

BECAUSE THEY HAVE AN INSANE SIDE PROJECT, MARMADUKE DUKE

Along with JP Reid, frontman of Sucioperro and Medals, Biffy also play in conceptual project Marmaduke Duke. In 2009 the band scored a chart hit with Rubber Lover, which was heavily based around a sample of Billy Joel’s Sleeping With The Television On, while follow-up Silhouettes was the world’s only known steampunk/disco song.

BECAUSE WHATEVER THE WEATHER, THEY’LL STILL GET SEMI-NAKED

“We were going through too many t-shirts,” drummer Ben Johnston told a US website, of the band’s fondness for baring their pale Caledonian flesh. “Generally a band comes on with shirts on and takes their shirts off after. It’s quite an image, because we’re not proud of our bodies. We just want to breathe, but it’s usually kind of a shock for people.”

BECAUSE THEY BLEW OUT ROBBIE WILLIAMS

While in LA, Biffy were first invited by Robbie Williams to take part in his regular ex-pats football game and then approached about helping Stoke’s seventh best rapper write a new album. Simon Neil was even asked to play a solo on it. They turned him down because “we had shit to do”. Slash played the solo instead. Of course he did.

BECAUSE SIMON NEIL WANTS A BEARD OF BEES

It has been widely reported that Simon Neil is an avid beekeeper and member of the Scottish Beekeeper’s Association. Only he’s not. But he did tell one interviewer: “Anyone could have a foot-long beard but not anyone could have a beard of bees. I’d shave my beard off and show my weak fucking chin to get a face full of bees. My wife would leave me, but at least I’d have a thousand bees on my face.”. What’s not to love?