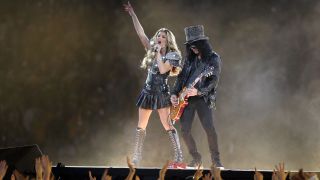 Last week guitar god Slash, made not one, but two, guest appearances at rock shows in Los Angeles, joining Aerosmith onstage at their secret club show at the legendary Whiskey A Go Go on April 7 to play Mama Kin and Train Kept A Rollin', then popping up at Motörhead's pre-Coachella festival warm-up at Club Nokia on April 11 to play Ace of Spades and Overkill with Lemmy and co. It got us thinking about some of the great man's many, many musical cameos in years gone by. Here's five occasions when the cool cat in the top hat showed up to lend his trademark guitar sound to other artists, with er, 'unforgettable' results.

Having previously recruited Eddie Van Halen to contribute the guitar solo to Beat It, on his multi-platinum Thriller album, Jacko reached out to Slash to provide similarly fiery fretboard pyrotechnics for a track called Give In To Me on 1991’s Dangerous album. Contrary to popular belief, the guitarist didn’t play on the album’s first single Black Or White – insisting in 2010 “That’s gay, I would never play that” - but that didn’t stop him from joining Jacko to perform the song at MTV’s 10th anniversary party. Watch ‘til the end for a not-entirely-convincing spot of rock ‘n’ roll rebellion.

Who saw this one coming? When one considers musical artistes who might make natural bedfellows, it would take a huge leap of imagination to partner the notoriously hard-living Slash with the sugar-coated, easy listening sound of singer-songwriter Carole King. And yet their collaboration on Hold Out For Love, on King’s 1993 album Colour Of Your Dreams worked, with Slash’s lyrical soloing adding tasteful shades to the monster ballad. The duo’s collaboration on raunched-up versions of I Feel the Earth Move and Locomotion on the Late Show with David Letterman was rather less successful however, featuring as it does some of the most awkward and icky attempts at creating sexual chemistry ever seen on stage.

In terms of profile and global outreach it’s fair to say that the United Nations-endorsed NetAid concerts staged in London, New Jersey and Geneva with the purpose of raising both awareness and capital to combat world poverty didn’t connect on the scale of Live Aid. It did, however, throw up this potentially intriguing collaboration between Slash and the Artist Occasionally Known as P. Diddy, Diddy, Sean John or whatever he’s called this week on rap-rock crossover hit It’s All About The Benjamins. We say “potentially intriguing” because the resulting performance, in front of one of the squarest crowds this side of a Jehovah’s Witness convention, re-defined the term ‘dialled-in’. Watch and yawn.

Slash vs Adam Lambert and the American Idol finalists (May 5, 2009)

“Those AI kids can sing their asses off” tweeted Slash enthusiastically in May 2009, after being chosen to mentor the four remaining contestants for ‘Rock Week’ on the show. Those afforded a little more distance from the epicenter of this monumental gathering of raw talent might, perhaps, be a little less effusive in their praise, for in tackling a horribly overblown version of Alice Cooper classic School’s Out, the budding rock stars howled and whined like alley cats fighting over a bloodied pigeon.

A mercifully brief cameo here, as our hero rises from the bowels of the earth wearing a gloriously blinged-out hat in order to supply that guitar line for a truncated version of Sweet Child O’ Mine. Fergie sings like her studded bra is on fire, one of the back-ground robo-berks shouts ‘Hey! Hey!’ repeatedly over the guitar solo and then everyone moves on to maul another ‘club classic’. Somewhere in LA Axl Rose might just have cracked a smile.