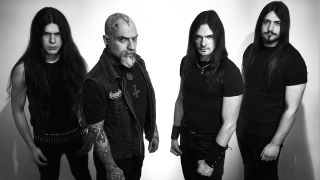 With a line-up change and a record deal with Candlelight, Italian extremists Blasphemer are adamant on pushing their sound deeper into the depths of eternal damnation – merging pureblood death metal, in both darkness and intensity, and the influences of the most Satanic of all music, black metal of course.

With previously unleashed diabolical tracks boasting titles such as Jesus Is Stripped Of His Garments, we couldn't think a band with greater authority to let loose a list of sacrilegious songs.

"An anti-Christian, blasphemous approach to death metal is what always characterized Blasphemer, even in the light of stylistic evolution and changes," explains the band.

"Death metal has always been about opposing, subverting, threatening - something that has lately been losing in favour of a more harmless aesthetic that for sure doesn’t fit our band.

"Deicide is the undisputed referral for everything blasphemous in metal. They were the real deal! It still freaks us out to think how angry, pissed off and completely offensive they used to be, not to mention their excellent musicianship - if that still doesn't cope with you, you should better close this page."

Morbid Angel - Blessed Are The Sick

"Morbid Angel definitely needs no introduction, but we’re picking this very song and its video, for their devil worship is lustful, the fascination of evil is so intense it’s basically irresistible. Blessed to live a life of sin, and to be sick!"

Immolation – Away From God

"Immolation's approach to antichristianity is deeply visceral even without using sickening images or lexicon. They just pity everything divine, we can't do but love the way they dim the holy light, let aside how influential their music is for us."

Incantation – Rotting With Your Christ

"Incantation depict holiness in the most decaying way possible: putrifying, emaciated holy figures, lifeless and deformed as represented on their grotesque album covers. Their message speaks loud and clear: you'll just be rotting with your Christ!"

Marduk – Glorification Of The Black God

"This band hates God so much it’s basically declaring war to him! Marduk’s relentless crusade against the heaven is second only to their unstoppable campaign of evil, sharp-edged music that more than ever is resonating on Blasphemer’s identity on this new album of ours."

"Despite it could have become that kind of old story everybody knows, having been exposed to pop culture by books and a film, do not forget Mayhem was literally subversive. A masterpiece whose lyrics were written by a suicidal misanthropist and sung by a reject, music written by church burners and actual killers."

Acheron – Fuck The Ways Of Christ

"Extreme metal also means digging in the dirt for some of it will always dwell beneath the surface, away from the eyes of those unprepared. We selected this Acheron’s underrated classics to represent the underground resistance to compromise and softening. Fuck the ways of Christ!"

"Glenn Danzig’s opus had an extremely significant impact in taking horror and ungodliness into punk, rock and metal music. But again, Snakes of Christ is as much fascinating as the devil gets. Blasphemy is something more subtle than inverting cross, and this song is seriously threatening."

"Black Sabbath’s first riff is evil incarnate and it’s legitimately scared even after years and years being desensitized by extreme metal and horror. Ozzy’s iconic verse 'Satan's sitting there, he's smiling, watches those flames get higher and higher' undoubtedly opened the gates of hell for generation of fucked up, sinister music."

Blasphemer – You Are Nothing

"The video single of our previous album is second to none in terms of bashing all things divine. A good way to introduce you to the past incarnation of the band. Evil may change face, but not its true nature."

Blasphemer's new album The Sixth Hour is out now via Candlelight Records and available on vinyl, MP3 and CD at Amazon.