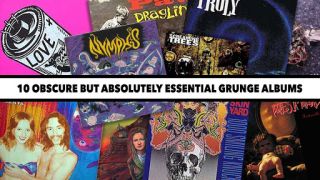 As down-tuned, distorted fuzz exploded out of Seattle in the early nineties, a ton of bands were swept up in its ferocious wave – some who are remembered more clearly than others.

But there was so much more to grunge than just ‘The Big Four’ – Nirvana, Pearl Jam, Soundgarden and Alice In Chains. Here are ten unsung heroes of the scene.

Alongside Soundgarden and Melvins, Skin Yard were one of six bands who appeared on Deep Six, an early grunge compilation released by Seattle label CZ Records in 1986. Skin Yard never gained the same popularity as their contemporaries, but individually, they made their mark on grunge’s legacy. Drummers Matt Cameron and Barrett Martin later joined Pearl Jam, Soundgarden and The Screaming Trees, while guitarist Jack Endino went on to produce albums by Nirvana and Mudhoney. But Skin Yard’s fourth record, 1000 Smiling Knuckles, which sits on the metal side of the grunge spectrum, deserves its own moment in the spotlight.

7 Year Bitch’s second album, ¡Viva Zapata!, was a fearless assault of militant, political punk, borne from tragedy. In 1993, the band’s friend and album namesake Mia Zapata, vocalist in Seattle-based band The Gits, was raped and murdered, while just a year earlier, original guitarist Stefanie Sargent had died following an overdose. As a result, pain and anger ruptures every bratty riff on this record, especially on anti-rape anthem M.I.A where vocalist Selene Vigil-Wilk roars, 'Who would be so shocked/ By the brutal murder of a killer?' It hits like a clompy boot to the face.

Fusing dirty guitars, neo-psychedelia and jangling guitar pop, Love Battery’s lysergic take on grunge set them out from the rest of the fuzzy, flannel pack. Amid a sea of malaise, Dayglo’s bright, interesting melodies were inspired by shoegaze bands like Telescopes and My Bloody Valentine, who buried melodies underneath violent waves of ferocious distortion, while vocalist Ron Nine took his lyrical cues from French symbolist poets on tracks like Foot and the kaleidoscopic Out Of Focus. This, along with Love Battery’s 1990 debut, Between The Eyes, is one of grunge’s most underrated gems.

Ugly, jagged and uncompromising, Babes In Toyland’s second album was the exact opposite of a major label debut watered down for the suits. 'You fucking bitch/I hope your insides rot', vocalist Kat Bjelland screams over slashing guitars on Fontanelle’s brutal opener Bruise Violet, a track widely thought to be about her then nemesis, Courtney Love. It sets the tone for the band’s darkest, most explosive record, which sees the band tackle misogyny, rape and abandonment with ineffable brute force.

Okay, so Sweet Oblivion, Screaming Trees’ sixth record, is not one of the most obscure albums of the grunge era – on the contrary, it sold over 400,000 copies. But it belongs on this list because, by rights, this is the album that should have made them massive. As far vocalists go, Mark Lanegan is one of the best out there. His weather-beaten, whiskey-smoked baritone guides the band’s unique sound; a fusion of dusty road Americana (Dollar Bill), gospel (No One Knows) and psych-tinged classic rock (Nearly Lost You). The Trees are grunge’s ultimate unsung heroes.

Tad were one of the first bands to be signed to Sub Pop, the legendary Seattle label that released Nirvana’s Bleach. But when grunge exploded, the band, led by imposing frontman Tad Doyle, were left behind. That said, Tad have one of the genre’s more varied back catalogues and on 8-Way Santa, which was recorded with Nevermind producer Butch Vig, they added a dash of accessibility to their tortured, serrated sludge. Their major label debut Inhaler, released two years later should have made Tad a much bigger band, but this is their defining moment.

Paw were outsiders, hailing from Kansas and relocating to the North West just as every A&R in the US was eyeing up every scuzzpot in Capitol Hill, looking for the next Nirvana. The band’s 1993 debut, Dragline, merged chunky sludge with the ragged choppiness of Dinosaur Jr and even post-hardcore dissonance on opener Gasoline. They became most famous for Pearl-Jam esque single Jessie, that became a minor MTV hit, but by the time they released their follow-up, Death To Traitors in 1995, the world had moved on. Still, Dragline is a lost gem worth digging out.

Few bands were dealt a more unlucky hand than The Nymphs. Kept on the back burner by their label Geffen, who were more interested in label mates Guns N' Roses and Nirvana, on its release in 1991, their debut was cruelly under-promoted. That’s a real travesty because Nymphs is a fantastic album which straddles glam and grunge with flamboyant euphoria. Sadly though, today the band are more known for an incident where, incensed by the constant delays, tempestuous vocalist, and icon-in-waiting, Inger Lorre took a protest piss on the desk of their A&R guy.

In the 80s and early 90s it seemed Seattle was the centre of the world, but Minneapolis was also breeding ground for bands like Janitor Joe, Soul Asylum and Babes In Toyland, who have all found their place in the grunge canon. Janitor Joe were formed by bassist Kristen Pfaff, and released their sludgy debut, Big Metal Birds, in 93. Mired in crackling, claggy production, it stands as one of grunge’s gnarliest, nastiest albums. Pfaff recorded just one album with the band before joining Hole – tragically, she was found dead a year later following an overdose.

Truly was a supergroup that included members of Screaming Trees and Soundgarden, but by the time they released their debut album in the mid-nineties, grunge was dead. In a musical landscape littered with diluted bores like Candlebox, Bush and Creed, Fast Stories... From Kid Coma was a breath of fresh air, retaining the bark and bite that had made grunge such a visceral force, with shades of Queens Of The Stone Age at their head thumping best on Blue Flame Ford, and Nirvana’s ragged fire on Leslie’s Coughing Up Blood. This was the scene’s one last, deafening roar.