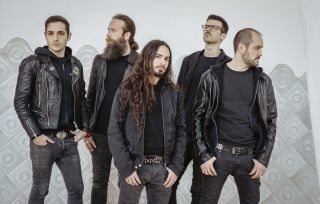 Spain has a rich artistic tradition that spans from the unique modernist architecture of Antoni Gaudí and the groundbreaking paintings of Picasso and Dalí to its diverse and expansive music scene – that includes, of course, extreme metal.

Foscor, literally translated from Catalan as "darkness", are one of this extreme music scene's most progressive offerings. Hailing from Barcelona, the Spanish quintet emerged out of the shroud of second wave black metal, channeling this melancholic bleakness into more avant-garde and progressive territory – pushing boundaries, it seems, lies in Catalans very blood.

The band have been moving away from the black waters in which they were birthed and further and further into progressive territory, with latest track Cel Rogent a stunning example of how they marry atmospherically rich, primal elements with progressive technical metal. Check it out below:

But despite this detour away from the extreme, Fiar, founder member, bassist, vocalist and lyricist for Foscor, explains that his "foundations were forged within the late 80s and early 90s extreme sonic fields, which still are a source of inspiration."

"When it comes to Spanish Extreme Metal acts ,we should not only focus our attention to the current days, because of the large list of crucial bands opening the hard path for many others before; dealing and struggling with the nonexistent tradition here for decades, on audience, references or infrastructure terms in Spain," he explains.

"Within black metal, death metal, grindcore, crust and the rest of extremist subgenres, there’s a large list of names and moments that have marked me, and for sure have had a big relevance here."

"Cult Thrash Metal band from Barcelona in the late 80’s. They were my youth heroes and one of the reasons I started playing music by myself, honestly. Lethal Liberty and Mind Training are simply lethal… and their third and last album, probably the most mature, recorded at Morrisound Recording Studios in Tampa, what to me seemed out of this world.

"More than 30 years ago, bands like Angelus Apatrida or Crisix prove that probably thrash metal is 'the style' here, and hold the legacy succeeding to the higher level ever seen on Spanish acts."

"Let’s come to current days. We have never had a Moonspell reference as Portugal still has, in terms of a band succeeding as hell out of the country. The comparison makes no sense here in terms of music, but there’s no doubt that no other band has reached the status of cult act out there than these monsters of grim chaos.

"They increase its level and intensity album after album, where death has another meaning below layers and layers of sonic 'punishment' in its best sense. Prepare yourself for their forthcoming album The Baneful Choir in September."

"We played with them at least twice during the first years of Foscor live activity, more focused on the extreme black metal sounds. These fine gentlemen set a so unique horror grind death trademark with tons of singles, splits and albums across Europe and USA.

"During 20 years they were probably the most international of our bands from mid 90s alongside Haemorrhage (still active). To me, an example of underground resistance and a true cult act. The death grind brand is so well represented here by bands like Gruesome Stuff Relish, Nashgul, Looking For An Answer or more recent Ósserp."

"From the ashes of Machetazo, in different time lapses have been appearing side projects with its members involved. The drummer Dopi is an old hand, and an unlimited source of awesome albums within all sort of old school stuff. Look at his most recent outcome Premature Burial, a bastard son between Celtic Frost, Voivod and Motörhead worth listening.

"Dishammer set a changing moment in this country because of this so authentic d-beat/crust exercise. In 2 years with a batch of singles, EPs and one album, deserves all sort of attention."

"Named after that Voivod song, during 10 years of sonic violence worshiping, this troop from Catalonia have got the attention and constant support of no other than Fenriz, also playing at the renewed Live Evil Festival.

"They hold the flag of a so authentic and vicious black thrash sound, as very few bands can do… and with a Voivod touch… Must listen to them!!"

"Parallel to Teitanblood in its beginnings, but not still active, reached the cult status all over the world thanks to a very clear speech and armour, literally and conceptually.

"War death metal in its most awful sense… hurting from the very first listening. From its ashes, 80s inspired act Sacrificio maintains the legacy of the most primitive rawness."

"If universe chaos might have a soundtrack, probably it would be Wormed’s music… They are label mates in Season Of Mist, and good friends from time ago.

"Seeing them live or listening to their albums is like suffering a big the biggest collision possible. Big Bang itself; one can feel the weird sensation of being inside a vortex of infinite power, with too many things happening… but clearly everything controlled and dispensed wisely by these beasts behind the instruments.

"An example of how working and moving a band from all parcels should be. Aesthetically, conceptually, networking, music… Masters of the most technical brutality in Sci-Fi code."

"No other band has been able to connect with the audience like these guys. 3 albums released and the feeling that they had the world at their feet. Blackened death metal sung in Catalan using poems of the very well known M.M. Pol and a so heartfelt approach to the social struggle.

"Catalan audience raised them as an icon, for both music and speech. Well deserved. After 10 years of hiatus they recently released a new album with the same incomparable vibe, once again with our guitarist Albert in the line-up, and adding our drummer Jordi to increase the complexity and intensity of the whole proposal. Unbeatable."

"This black/death band from Girona has reached a huge exposure since their very first demo in 2013. Very clear ideas in and out the stage, and a so unique live ritual experience which for set the sign of these days aesthetically and musically.

"I feel that Spain has delivered their most interesting black/death efforts within the last years, alongside Balmog, Calyx, etc..."

Also label mates in Season Of Mist, and a clear example of how experienced musicians ( unkown… of course ) have no need of more tools than very few clear ideas and the strategy to go forward and forward from its very first demo, rising a so solid act. Their music is hard to describe. You must feel their suffocating chaos. A distorted ad unreal echo from beyond where delivering your soul and float in… the void.