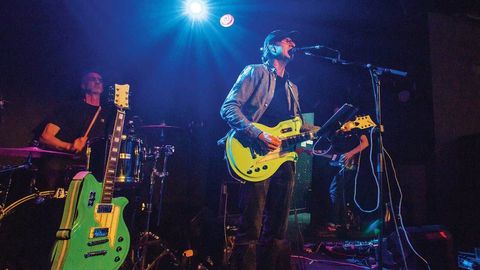 You come to a Wire gig well aware that they’re revered. They straddle the worlds of rock, punk and new wave, have influenced bands from Black Flag to The Cure to Blur, and their evolved, art school ethos elevates them above most of the gob‑soaked Class Of ’77. They’ve always cocked a snook at the trappings of rock stardom, though it’s still striking how unceremonious their approach remains.

The house lights are still up, the pre-gig tape’s playing, and there’s Graham Lewis, kneeling at his effects unit and tuning his bass. Matt Simms is hanging stage left, guitar strapped on and waiting for the nod, while Colin Newman – baseball cap wedged low over his head – is twiddling knobs. No dramatic walk‑on here, then. The 100-plus punters patiently let Wire do their thing, with a minimum of hand-shaking.

This compact, shabbily lovely venue hosts one of the last shows of this year’s run in celebration of Wire’s 40 years as a four-piece (Simms replaced founder member Bruce Gilbert, who quit a decade ago). It’s typical of their forward-looking nature that with 15 other albums in the catalogue to draw on, nearly half of tonight’s set is taken up with tunes from their new one, Silver/Lead – the latest fruit of their creative Indian summer.

And from the opener Ahead, Wire are loud – Robert Grey’s kick drum kicks you in the chest from beat one. Then, in a row, we get Diamonds In Cups, An Alibi and This Time, all from the new record. Lean, strident and very catchy, the spartan architecture of these pieces is swathed in Newman and Simms’ loud, swirling guitarscapes, with the former’s laconic vocal delivery plangent and clear overhead. If some new psych band had just released these, the music press would be all over them.

After a fuzzy read of fan favourite Three Girl Rhumba (the one dip into seminal debut album Pink Flag), they turn things up to assault levels. Always defiantly raw, the thrashy avant-punk of Underwater Experiences is painful tonight, though the blokes-of-a-certain-age dominating the room lap it up, feet tapping, heads nodding.

For all their avant-garde credentials, Wire rock hard. Grey powers the ever‑building Red Barked Trees beautifully, while Simm shows off the squalling textures many post-rockers have copped from this band, often indirectly and at several removes. A throbbing read of Split Your Ends beats you into submission, and new song Short Elevated Period has to be among their all-time best.

It’s a crisp, satisfying 75-minute set, with barely a word spoken. With a lot of road behind them, Wire’s tank is still brimming. They don’t stand on ceremony tonight, they just ride right over it, ever onwards.