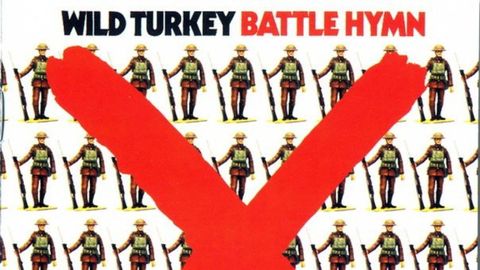 Maybe, in hindsight, it wasn’t the best career move, quitting Jethro Tull after playing bass on their first three hit albums. But Glenn Cornick admits he was “thrown out”, so had little choice but to lick his wounds and persevere with a new band. Listening to these two albums from the early 1970s, now officially available on CD for the first time in 15 years, it’s doubtful they gave Ian Anderson any sleepless nights.

Battle Hymn is the more accessible of the pair, but if Cornick had a musical vision for the band, it has been lost over the years. At odds with rhythm guitarist Jon Blackmore’s folk roots, any power Wild Turkey might have unleashed is undermined by the weak vocals of Gary Pickford-Hughes. And those lyrics… ‘Yesterday’s tomorrow is tomorrow’s yesterday!’

There is none of Tull’s freewheeling diversity; an Allman Brothers element surfaces on the unfortunately-named second album Turkey. There are some amiable detours (the melodic Tomorrow’s Friend) but not enough to elevate Wild Turkey from the plethora of prog bands exploding all over the UK music scene at the time.

When it comes to albums by ex-Jethro Tull members, my advice: stick to Blodwyn Pig.