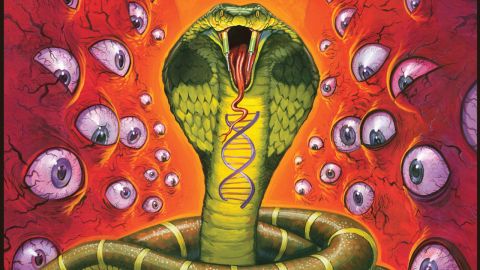 Another Toxic Holocaust album, another batch of Discharge, Venom, Slayer, Anti-Cimex and Sodom riffs twisted into form. To pillory the Portland trio for continuing to connect the dots between 2013 and 1986 isn’t the goal – if every remotely unoriginal album was slammed in these pages, we’d be bogged down in a lot of 0/10s.

What makes them special is how they’re able to convey the passion of a band who’ve truly listened, absorbed and dissected those early classics and are doing far more than simply taking those bands for an ironic spin before moving on to the next trend.

Older heads will have already heard the majority of Chemistry Of Consciousness throughout their lifetime, but here it’s evident that the energy level is ramped up with machine-gunned two-beats, a brighter guitar sound and a variance of tempo that keeps album number five sounding lively and fierce. Acid Fuzz, Salvation Is Waiting and Silence are definitely salutes to a certain era, but with rocking riffs and ripping solos this awesome, who cares?