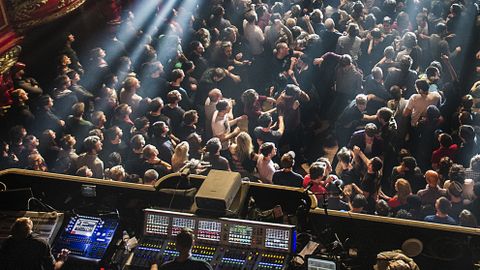 It’s Friday night in The Black Heart, and the launch of London quartet Thumpermonkey’s latest EP, Electricity, on the Rockosmos label. There’s a terrific supporting line-up and, presented by esteemed promoters Chaos Theory, this is a sell-out show. As the Small Faces once said, it’s all too beautiful.

One thing that’s not at all beautiful, though, is the quality of the sound. Since the ’Monkey last played here with Awooga a year ago, an overdriven abrasiveness prevails. It doesn’t actually ruin things, but it’s lurking constantly. Luckily, Ham Legion’s energetic, Cardiacs-inspired style is relatively untouched. Guitarist Sam Clarke wears a head torch for extra visual guidance while he grapples with impossible chord shapes. “I wish I’d had a miner’s hat,” he tells us afterwards.

Tonight’s audience features folk from A Formal Horse, as well as Cairo’s Rob Cottingham. But maybe that’s not too surprising, because Thumpermonkey don’t play many live shows. You could say that on the one hand, they should definitely make an effort to do more gigs as they’re such a tremendous force onstage. But on the other, because they do play so few, it makes each appearance more of a special event, so everyone makes the effort to turn up and see them.

Tight, powerful and metallic but balanced by a poignant undercurrent, this is art prog on a higher plane, both musically and intellectually. And yet they can still hook you and reel you in with a groove, as Tzizimime demonstrates. They’re hilarious as well – witness guitarist/keyboardist Rael Jones’ syncopated dance-conducting to Garmonbozia and guitarist/vocalist Michael Woodman in Monty Python-esque character for Proktor Cylex. And it’s always a thrill when Jones moves into the crowd to play. Tonight we also get the evil bounce of Wheezyboy, which Thumpermonkey never perform – maybe because it’s ‘popular’? Yes, they can be a very contrary lot!

Reviewing Thumpermonkey’s new EP in issue 81, Grant Moon asked, “Why aren’t the band carried shoulder high everywhere they go?” Well, we could try, but doubtless they wouldn’t like that either, the awkward, brilliant bastards.