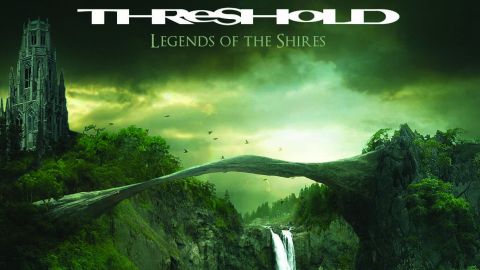 It all went a bit soap opera in the Threshold camp earlier this year. The prog metallers unceremoniously dumped singer Damian Wilson after his third stint in the group as they chose to “start a new chapter without him”. But the singer quickly catapulted a retort back, saying the decision wasn’t mutual. “This was really unexpected. The only contact I’ve had with Threshold these last few months has been via email,” he told Prog in March.

This type of intra-band squabbling happens all the time, but when it’s a group who have released 10 albums, and a classy singer who has worked with Headspace and Ayreon and once came close to joining Iron Maiden, it’s a big deal. It was easy to forget about the music amid all the drama, but yes, Threshold have a new album, Legends Of The Shires, and yes, it is rather good. Filling Wilson’s rather voluminous boots is former vocalist Glynn Morgan, who was a member of the band for a couple of years in the mid-90s.

Threshold signed to Nuclear Blast over a decade ago and their output since has suited the label’s heavy-leaning ethos, but album number 11, Legends Of The Shires, sees the Brits turn up the prog dial a little more. It’s an 83-minute double concept record, with two tracks surpassing that hallowed 10-minute mark, and there’s a little more leeway with the music – harmony, acoustic passages and grandeur are as important as the riffs. And no, the record is nothing to do with Lord Of The Rings.

It’s still heavy though, with the metal meets melody sound nodding at times to their label comrades Symphony X. Morgan slots back into the fold nicely too, with his sweeping vocals enjoying a slightly more gruff payoff than Wilson’s operatic style.

Get past some of the more corny, fist-clenching moments, like the chorus to Small Dark Lines and some slightly dubious lyrics (‘I just can’t wait any longer/my heart won’t beat any stronger’) then there’s plenty to tuck into. The Man Who Saw Through Time is a superb salvo reaching nearly 12 minutes, with an absorbing intro metamorphosing into a full-blown prog metal romp, guitar and keyboard in unison, ricocheting around. It’s sonically pinpoint sharp too, with brooding basslines and atmospheric keys flirting with some slithering groove in style on the likes of On The Edge.

Threshold don’t have Damian Wilson any more, but they still have the talent to craft some very fine songs. And isn’t this what it’s all about?