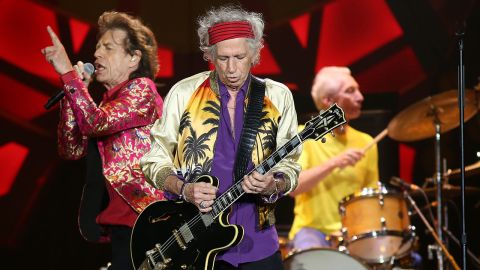 When it was announced that the Rolling Stones were to release an album of blues covers, no one voiced a word of disappointment. For while Stones fans invariably welcome brand new material from the pens of Messrs Jagger and Richards, it’s when they return to the source that they truly set pulses racing. No other band executes the blues quite like the Stones. They invariably play with reverential respect to the spirit and feel of the original recordings, but bring much more to the table.

In 1964, their first album not only seduced a generation of teeny screamers from simmering repression, it also provided an alluring glimpse of a musical tradition with an appeal hitherto limited to a purist hard-core but that boasted the power and potential to conquer the world.

The Stones were blues evangelists. Their eponymous debut introduced future standards by Willie Dixon and Jimmy Reed into the mainstream yet, while remaining true to the originals, they infused each recording with a raw vitality and licentious swagger that was quintessentially Stones.

While all that remains of the Stones’ ’64 line-up is the central core of Mick Jagger, Keith Richards and Charlie Watts, they have since accrued 156 more years experience in providing blues material with their unmistakable signature spin. Where once was pianist Ian Stewart is Chuck Leavell; where once taciturn bassist Bill Wyman, Darryl Jones. But the most crucial difference between ‘those’ Stones and ‘these’ Stones is the substitution of Ronnie Wood for Brian Jones. For while Jones was the Stones’ most fervent student of the blues, and duly applied himself to proceedings with meticulous care and attention, Ronnie is more of a visceral, intuitive player, who in the heat of the dual guitar weave has always had a tendency to crank up the inherent brutality in Keith.

Aside from the influence Ronnie’s exuberance has had on the Stones’ increased (and, apparently, increasing) aptitude for the casual attainment of blues perfection, Watts’s ever-reliable swing is a factor that can’t be over-estimated. When locked into a chopped, or indeed caressed, Keith groove it’s undeniable; the irreplaceable foundation upon which the Stones have built a global empire.

Today’s Rolling Stones, in spite of all the fix-in-the-mix temptations today’s digital age has to offer, retain a skill set far beyond most contemporary artists. They’re just as, if not more, capable of recording completely live in the studio as they were when they first entered Regent Sound Studios in ’64. Upon reconvening at British Grove Studios in Chiswick last December with co-producer Don Was, the band reportedly set up in the round, facing an array of microphones in the centre of the circle, and three days later emerged with an album. And from the first note of Blue & Lonesome that’s exactly what you hear: a band in exceptional form, captured raw, vital, alive and – above all – kicking. Kicking harder than you’d expect of a band in their proud, preening, priapic prime. Just as hard as any band extant and certainly as hard as the Stones have ever kicked before.

Vocally, bang on the money, he grabs ‘up-tempo dizzy’ opener Just Your Fool (the first of four Little Walter compositions) by the scruff to deliver an assured and confident performance. But it rapidly transpires he’s only warming up. He roars through Howlin’ Wolf’s Commit A Crime, soars above Walter’s Blue And Lonesome like a man unhinged by the injudicious nature of fate, before Magic Sam’s sedately paced All Of Your Love coaxes a hackle-raising performance that’s vintage Jagger in excelsis.

And so it continues: a spirited sprint through Walter’s I Gotta Go (with an in-form Ronnie on fire), Little Johnny Taylor’s Everybody Knows About My Good Thing, the first of two sedate, though far from understated guest spots from Eric Clapton, who slots his slide into proceedings perfectly (the second being Willie Dixon’s previously Zepped closer I Can’t Quit You Baby).

Whether taming Eddie Taylor’s Ride ’Em On Down, riding the groove of Walter’s Hate To See You Go, squeezing sparks from Lightnin’ Slim’s Hoodoo Blues, evoking the elements on Jimmy Reed’s Little Rain or rocking up a storm on Dixon’s Just Like I Treat You, Jagger has never sounded more at home. And with every number punctuated by supernaturally adept harmonica masterclasses, it all adds up to his finest performance in decades.

Blue & Lonesome captures the Rolling Stones – The Greatest Urban Blues Band In The World – in their element, doing what they do best. You’ll only wish they did it more.

The Rolling Stones: The Story Behind Honky Tonk Women