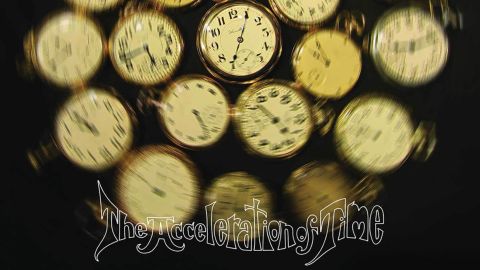 Listening to the latest psychedelic whack-out from The Luck Of Eden Hall, one cannot help but recall 1960s TV series The Time Tunnel, which told the adventures of two scientists ‘lost in the swirling maze of past and future years’, who each episode ‘tumbled helplessly toward a new fantastic adventure somewhere along the infinite corridors of time’.

For the mysterious, shifting patterns of time are at the core of this enthralling album, the ominous sounds of tick-tocking grandfather clocks regularly punctuating the Chicago tripsters’ Mellotron-heavy, inter-dimensional music. The phaser-powered songs – all 75 minutes’ worth of them – might be breezy, brain-addled affairs (ref. The Move’s I Can Hear The Grass Grow) but the overriding message is that humankind is helpless to halt the march of time: ‘We stopped to smoke some hash/Soon we’ll be old and daft/Our bodies turned to ash,’ as the title track reflects. There are numerous highs but Arthropoda Lepidoptera is the standout, a seriously affecting love song with the diamond-studded lyric: ‘She is the one with the peach blossom tangled surprise.’ If they changed their name to The Luck Of Bingo Hall, then TAOT would be the equivalent of a full house.