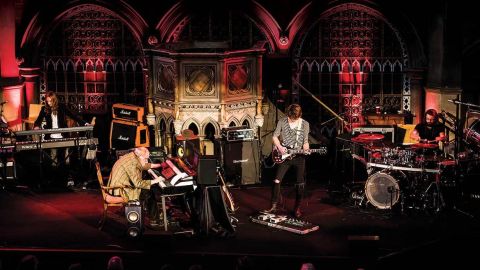 Robert John Godfrey, diagnosed with Alzheimer’s in 2012, may have given up performing as a regular member of The Enid, but that doesn’t mean he’s retired. In fact, he’s here onstage, to share his 70th birthday with many of his fans – or “fellow travellers”, as he calls them.

Such is the love for The Enid mainstay, and his music of matchless symphonic beauty, that people have travelled from Japan, the Emirates, Turkey and Canada. The fact that it is also the farewell performance of drummer Dominic Tofield, the driving force behind this year’s album Resurgency, adds to the sense of occasion.

Not that The Enid need an excuse for celebration. Godfrey might move weakly to his chair positioned behind his laptop/gadget set-up, but there’s nothing diminished about his contribution as musical director/conductor, nor his music, delivered tonight by Godfrey, Tofield, guitarist Jason Ducker and keyboardist Zachary Bullock. The first half of the concert comprises side two of 1976 debut In The Region Of The Summer Stars, and it is by turns ravishing and rousing. And Godfrey’s presence onstage tonight gives the music an extra poignant power.

It’s not all weepy orchestral transcendence, harp glissandos, pizzicato flourishes and magisterial crescendos. There’s plenty of room for laughter too. “I haven’t lost my sense of humour,” Godfrey says, with a defiant chuckle. “My marbles, yes.” He announces Charades I: Humouresque from 1979’sTouch Me, “an album I loved and hated – the music was great but being in that band at that time was awful for all concerned,” he reveals of The Enid, who have been prone to more line-up changes than Yes and Spinal Tap put together. “Some marriages,” he adds, “are not designed to last.” He laughs, before adding, “This isn’t meant to be a night of me rambling.” Godfrey then proceeds to discuss his sexual orientation, erectile dysfunction, “butch peasants” and his parents’ “mild racism” at considerable length.

Nothing can detract from the music, though. Sheets Of Blue remains a thing of schizoid loveliness, The Lovers is Gershwin-gorgeous and ’Til We’re Old is dedicated to a woman among The Enid’s ardent, yet ageing, audience suffering from cancer. After the break, Godfrey plays a snatch of Homily, the title track from his new solo album, all Gregorian grandiloquence, plaintive music born of pain with a redemptive quality, followed by Chaldean Crossing’s quasi-ambient rock, Childe Roland, Ondine, Mayday Galliard and finally Fand’s First Movement and Second Movement, which is Spielbergian in terms of symphonic heft; music of epic sweep and scope. Godfrey was going to end with a cover of Wild Thing, but there’s no time. Besides, he doesn’t need to. Instead, he removes his bow tie and chucks it towards the faithful at the front. Baroque’n’roll!