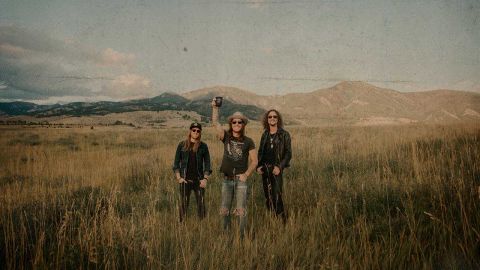 Four albums in, and The Cadillac Three are experimenting with Philip Glass-style atmospherics, and dour lyrics exploring the perilous state of the planet’s changing climate.

Just kidding. Of course they’re not! The CadillacThree are a band very sure of who they are and what’s expected of them, so everything you need to know about Country Fuzz is right there in the title, which stands as a sort of manifesto for their approach to life.

Their country is almost to the point of parody, with a harder southern rock edge to keep things interesting, and there’s not a single song on here that doesn’t tip its weathered trucker cap to the simple wonders of ice-cold beers and/or whiskey, while the rolling, swaggering Hard Out Here is nothing short of a rollicking game of redneck bingo, taking in brews, “hot girls”, NASCAR, smokes, hound dogs and chicken wings for a Nashville full house.

Mainly, though, it’s the booze that’s on their minds and in their hearts, and frontman Jaren Johnston kicks off opener Bar Round Here with a determined hyper-southern drawl of ‘Well, I sure am thirsty’ before carrying on the blue-collar barfly theme with a ZZ Top-echoing Crackin’ Cold Ones With The Boys, a twanging Jack Daniel’s Heart and a loping Whiskey And Smoke, with its fist-pumping chorus that speaks of a 2am desperation to catch the bartender’s eye.

There are also moments of reflection to be found in the midst of the 16 funk-flecked tracks here. Raise Hell, for all its talk of alcohol and Marlboro reds, is drenched with misty-eyed regret, percussion pounding like a hangover and Johnston lamenting how ‘it’s tough to get in heaven if all you wanna do is raise hell’ as if he’s had a sudden moment of clarity amid the debauchery.

Closing number Long After Last Call, meanwhile, is surprisingly romantic, tender and light on its feet, the band finally discarding the armour of greasy masculinity as they wobble their way home from the local watering hole to the warmth of the company of their better halves. Mainly, this isn’t music intended to inspire soul-searching.

With its fat, fuzzy riffs and living-for-the-weekend vibe, it’s made entirely for boozy barbecues and blokey banter, and maybe the odd trip to a monster truck rally. And you can be sure that The Cadillac Three wouldn’t have it any other way.