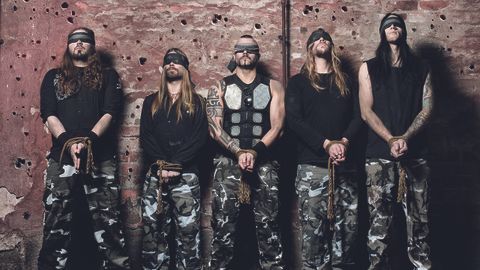 Sabaton may be a Marmite band in the UK, but over in Europe they draw in serious numbers – as shown on this double live DVD. Heroes… includes their headline slot at Wacken 2014 and their performance at their own festival in their hometown of Falún.

The intro to their Wacken performance includes brief interviews with their crew that indicate the scale of the show ahead, as well as a corny skit that shows the band getting ‘held up’ before going onstage; the Falún show intro is more of a mini-documentary on the festival.

Those who’ve seen Sabaton live will know the drill: tanks, lots of camo, catchy singalongs, all set to a performance that’s part cheesy pomp, part testosterone-drenched bravado. They up the ante at Wacken with a complex light show, bursts of fire and yet more tanks.

Frontman Joakim Brodén tells jokes, gabs to the audience and chugs a beer onstage at their request as the whole band have a ball. It’s childish, it’s silly, it’s power metal panto. And it’s hard to imagine a single Sabaton fan who would say no to that.