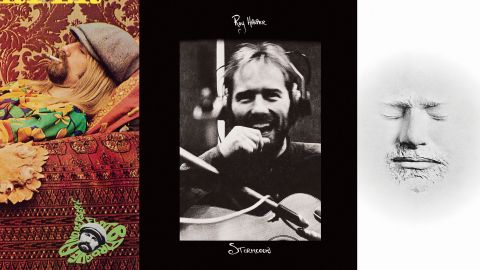 Roy Harper’s always been an outsider. A folk singer who, by his own admission, would often get thrown out of folk clubs for the crime of not being like Ralph McTell, throughout his career he’s thrived on blurring boundaries and subverting expectations. 1970’s Flat Baroque And Berserk catches him more in command of his art than perhaps on any his previous recordings. What’s always been interesting about Harper is his range and interest in presenting stark contrasts and provocative juxtapositions. Achingly beautiful ballads Another Day and Tom Tiddler’s Ground hover angelically next to the righteous, vitriolic ire of I Hate The White Man. This is the point where his reputation as an unflinchingly articulate commentator of real depth is forged. Never quite cap-in-hand to Dylan, this is Harper’s last album with vestigial traces of the Nobel Prize-winning songwriter’s influence. Harper enjoys his own ‘going electric’ shock, joining forces with The Nice and rocking out on Hell’s Angels.

While he could have rested on his laurels, 1973’s Lifemask pushes onward, using the recording studio as a creative tool. The side-long 23-minute suite The Lords Prayer conjures tape-manipulated, sonic-sculptures around a spoken poem as he then embarks on a powerful, vehement contemplation on people, politics, and the relative distances between the personal and universal. Featuring well-crafted embellishments from Jimmy Page, here Harper is about as far out from any his down-strumming contemporaries as it’s possible to get.

Although originally well recorded these albums sound even better on 180gm vinyl. Stormcock, remastered in 2007, and Flat Baroque And Berserk and Lifemask from 2016, the sensitive and empathetic remastering of the latter in particular coaxes new detail during The Lord’s Prayer. Meticulously recreated LP sleeves, boasting additional inner sleeves with new observations from Harper, complete a fitting tribute.