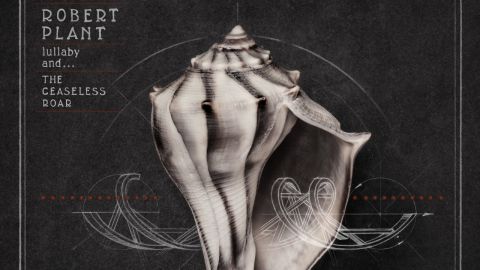 Consider the lot of Robert Plant. On the one hand he appears to be one of life’s natural seekers, a man with an unslakeable thirst for new sounds and ideas. On the other, he’s the figurehead of the greatest heavy rock band of all time. You suspect that a sizeable portion of his fans wish he was still there, fronting Led Zep on an endless tour loop. But all that reunion brouhaha seems, oddly enough, to have liberated him from some of the baggage of his past.

The only nostalgic thing about 2010’s Band Of Joy was the title itself, borrowed from one of his pre-Zeppelin line-ups. The music, however, was a compelling blend of sidelong Americana with proggy roots and squirts of electronica. Lullaby And…The Ceaseless Roar is another extension of that approach, though this time the accent is on world rhythms and a very percussive kind of exotica. This is very much an ensemble piece. Plant’s vocals smoulder rather than explode, making it a smart fit for the West African flavours and evocative moods of the music.

The Sensational Space Shifters are a six-piece band made up from most of the members of Plant’s mid-noughties set-up, The Strange Sensation. The key new arrival is jazz drummer Dave Smith, whose incredible chops provide a base from which the others coerce various tools – from Malian flutes and Gambian fiddles to conventional guitars and pianos – into tangential rhythms that feel like planned accidents.

At its best, Lullaby… is a vivacious mix of the familiar and the less so. Little Maggie, one of two covers here, digs into its bluegrass roots with Skin Tyson’s banjo, then twists it into a celebratory gypsy reel that’s as much West Africa as West Virginia. Pocketful Of Golden is another wonderful example of the band’s eclecticism, imprinted with Massive Attack-style beats and the soulful burr of Plant’s voice.

He’s also careful to leave a trail here and there. The balletic A Stolen Kiss is a song about home, one of several inspired by Plant’s recent return to the Welsh borders of his younger days. And on Turn It Up, an American road trip is hijacked by the sudden spurt of an old song of his from the radio. His cry of ‘Let me out!’ is as loud as he gets on this lovely record. It’s one in which Plant makes precious few concessions to what’s expected of him, and it’s all the richer for it.