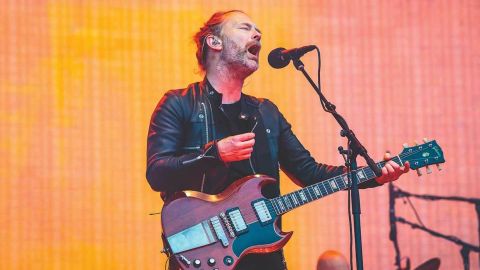 Radiohead are a band that have been over-intellectualised to the point that even approaching a more in-depth discussion or dissection of their music is to tread very well-worn ground indeed. However, these dates are significant – they function not only as the album tour for return-to-form record A Moon Shaped Pool, but also the 20th-anniversary of their opus, OK Computer, the yardstick by which not only all mainstream alternative rock must be judged, but also most modern progressive rock.

With OK Computer, Radiohead opened a crack into the mainstream for left-field acts pushing the envelope, from cult bands like Pure Reason Revolution and Oceansize to those like Muse or Steven Wilson who have found more lasting commercial success.

The wider impact of their music is largely irrelevant tonight, though – this is a pure celebration of a band still able to deliver at the peak of their powers. The setlist is an enviable collection of songs, with everything from the bombastic grunge rock of The Bends during their second encore to the paranoid electronic glitch-hop of Idioteque in the main set.

Opening gently with Let Down, the band quickly start bringing out the heavy hitters, with highlights Lucky and Airbag played within minutes of each other. During 10⁄4 synth stomper Everything In Its Right Place, guitarists Ed O’Brien and Jonny Greenwood even dispense with their guitars, taking up sampler pads to manipulate Thom Yorke’s vocal in increasingly jarring and strange ways. No Surprises finds the audience shouting back the line ‘Bring down the government/They don’t speak for us’ at the band, before cheering.

Closing the main set, 2+2=5 is probably the most rabble-rousing song of the night, with the audience jumping around to the energetic climax before the band finish and clear the stage.

Returning for an encore, they ebb into Daydreaming, possibly their single saddest and emotionally devastating song, before abruptly changing the mood with the sprawling Paranoid Android.

After their gravity-defying Glastonbury headline slot, a clever soul observed on Twitter that where an older generation had The Beatles’ Hey Jude as a culturally shared singalong song, it’s a sign of less confident times that late Generation Xers and millennials have Karma Police instead. It’s the song with which Radiohead end their second encore tonight. Indeed, as Yorke leads the crowd through its outro coda of ‘For a minute there, I lost myself’, the audience more or less drown the band out.

Tens of thousands of voices keep the refrain going long after the band have left the stage, in a spontaneous shared moment that must send shivers down the spine of even the most jaded onlooker.