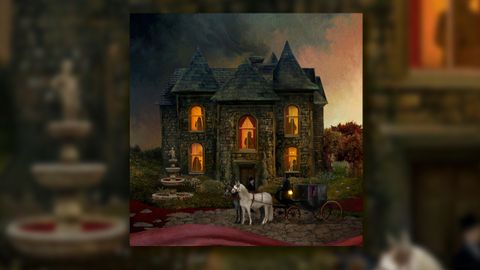 Hang up the bunting, blow out the candles and bust open the party pack of Skol lager: 2019 is the year that Opeth turn 30. You couldn’t blame Mikael Åkerfeldt for stopping, looking back and thinking, “What the hell happened there?” No one could have predicted the journey the callow death metal band he co-founded as a 16 year old with original vocalist David Isberg would take, not least Åkerfeldt himself. From pimple-faced Bathory knock-offs to grand high regents of retro-modern progressive metal is some makeover.

In reality, the evolution of Opeth has been a series of small revolutions rather than one explosive overhaul. Even their greatest leap forward – the arrival of 2011’s fully prog-facing Heritage – wasn’t completely out of the blue for all the perplexed (and perplexing) furore it caused. It’s not as if Mikael Åkerfeldt hasn’t been wearing his 70s influences on the sleeve of his brown velvet jacket since forever.

The albums the Swedes have released since that mildly stubborn statement of intent, 2014’s Pale Communion and 2016’s Sorceress, have rowed back slightly, tweaking dials rather than giving them a spin just to see where they end up. Consquently, there are fewer bands held in consistently higher regard in the overlapping spheres of modern metal and latterday prog.

In Cauda Venenum won’t damage that reputation any. The stringently high standards to which Åkerfeldt holds himself and his band remain intact. From the vintage art-house horror movie electronic pulse of opening instrumental Garden Of Earthly Delights to the billowing, crashing crescendo that comes 60 minutes later with closing track All Things Will Pass, it exudes classiness and classic-ness.

There’s a twist this time around: Åkerfeldt recorded his vocals for the album in Swedish – a language which isn’t necessarily a natural fit for balls-out rock’n’roll but whose gentle gutturalness suits the complexity of Opeth’s music. Fortunately for non-Scandinavians he’s backed it up with an English language version.

While you don’t necessarily come to an Opeth album for the lyrics, the translation is welcome. Åkerfeldt, who pegs himself as a liberal-leaning social democrat, has talked this up as his most pointedly political album. Some of it is subtle: the sample of assassinated left-wing Swedish Prime Minister on Dignity (Svekets Prins on the Swedish version). Some of it is less so: the lyrical references to ‘fascist lies’ and ‘the selfish wish to control a nation’ that come hand-in-hand with the sound of admiring crowds at a political rally on The Garroter. Fittingly, the latter is In Cauda Venenum’s most unsettling track, mutating from baroque acoustic guitar into an ominous mash-up of jazzy piano chords and hypnotic woodwind.

Storming the barricades or not, what’s evident early on is just how heavy this album is – not old-school Opeth heavy, but heavy as in dense, involved and occasionally challenging. Heart In Hand judders with a riff that sounds like a mechanical earth-mover and a relentless barrage of drums. Of course, Opeth being Opeth, it also features a bucolic acoustic section, a range of strange electronic noises during the song’s mid-section, and a chorus that can reasonably be described as epic. The shapeshifting Next Of Kin – featuring a return guest appearance from Canterbury scene keyboard boffin Dave Stewart – possesses a coiled-spring tension that climaxes with a dense, complex spiral of sound.

It’s not all tense-nervous-headaches set to music. Universal Truth finds the band in a 60s mood, mixing acoustic guitar and swelling orchestration to mildly psychedelic effect (at least before a jagged riff kicks in and harshes the mellow). And the album’s standout song is also its most direct: the slow-burning Lovelorn Crime begins with a plaintive piano melody that shifts gears into a monster of a chorus and one of the finest solos guitarist Frederik Åkesson has ever laid down. It’s only after a couple of listens that you realise Opeth have gone and written an honest-to-god power ballad, and In Cauda Venenum is all the better for it.

Downsides? None as such – this is Opeth, they don’t make bad albums. But sometimes you wish they’d tear up their own rulebook. Where Åkerfeldt’s old oppo Steven Wilson can blindside you with a stylistic left-turn, you know exactly what you’re getting with the Swedes: the proportions might be different, but the recipe is the same. You occasionally wish they’d head off somewhere they’ve never been before – fully ramp up the electronics, perhaps, or go for broke and drop in a twisted Swedish reggae song. Anything to mix it up a little more.

But that’s just churlish. Nobody wants to ruin Opeth’s birthday celebrations, especially when they’ve spent 30 years perfecting their groove. In Cauda Venenum isn’t the culmination of that journey, but another near-faultless step on the way. Now, where did we put that Skol?