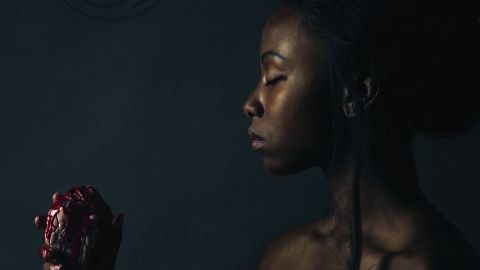 Oceans Of Slumber have long been refining their formula, blending the dynamics of old school death metal with modern progressive rock. Vocalist Cammie Gilbert’s clear vocal gives a real freshness to their sound, even where the instrumentals are conforming to the expected mores of a genre. The joins between the more prog versus metal timbres aren’t always seamless though, such as the somewhat jarring transitions in At Dawn from blast beat death metal to melodic clean vocal sections with Gilbert taking the lead. That said, when these sometimes abrupt transitions do hit home, they define the dynamics of the album and set it apart from other works in the genre. What’s interesting is that when the riffing returns to somewhat more classic rolling chugs later in the same track, the juxtaposition between the instrumentals and Gilbert’s voice is nothing short of electric. Indeed, this is a feature of many of the best tracks, such as Etiolation and the furious A Path To Broken Stars. The title track is where it all comes together: a nine-minute cut of metallic elements, a brooding and intimate piano section, and a bombastic prog finale that all gel together perfectly.