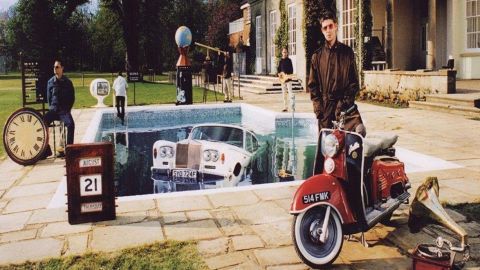 Twenty years have not been particularly kind to the ego-pumped indulgences of Oasis’s Britpop-murdering third album Be Here Now, famously the sound of cocaine turned up to 11. The lengthy plod-outs, dusty country interludes and oceans of ‘look ma, we’re The-Beatles’ bombast that turned the fastest-selling British album ever (at the time) into the album most flogged to second-hand record shops grate as harshly today as they did in 1997.

Fade In-Out remains a pointless Doorsian frippery, the title track a crunchy Quo, D’You Know What I Mean and Don’t Go Away a brace of painfully stretched Wonderwalls, the ludicrously overblown All Around The World a 10-minute audition for a West End panto production of The Magical Mystery Tour, directed by Wagner. Only It’s Gettin’ Better (Man!!) and the mighty Stand By Me have grown in stature, the latter as deathless a classic as when Bowie first wrote it as All The Young Dudes in 1972, but all the meatier in the hands of Oasis in full pomp.

But the additional CDs redeem the era. Every B-side here is superior to half the record – Stay Young, (I Got) The Fever, The Fame and the frankly incest-y My Sister Lover are the kind of vivacious glam-pop that could have lifted the album out of its quicksand of pure gak – and the original Mustique demos, sung by Noel, have intriguing flecks of psychedelic grunge. So Be Here Now was never going to epitomise Britpop, but it needn’t have been its cyanide pill.