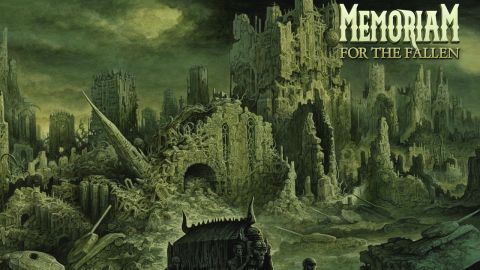 “From the darkness comes light, from the sadness comes joy, from the despair comes hope. This is Memoriam.” So says vocalist Karl Willets, he of Bolt Thrower fame, of his new band’s positive modus operandi. Karl, along with his old scene pal, Benediction bassist Frank Healy, started Memoriam as a means to process their grief following the respective deaths of Bolt Thrower drummer Martin ‘Kiddie’ Kearns and Frank’s father. Both men wasted no time talking ex-Bolt Thrower drummer Andy Whale out of retirement for his first studio recording since 1994’s death metal classic… For Victory, and rounded out the lineup by recruiting a relatively unknown riffmaster, Scott Fairfax. On paper this may sound like the UKDM institution has come out of indefinite hiatus in a different form, and as last year’s Hellfire Demos EP attested, Memoriam is clearly a new battle machine. Where BT bludgeoned mercilessly with Jo Bench’s guttural low-end, Memoriam are more exacting in their artillery fire. Karl’s scarred vocals are less death-bark, more a heavily accented hardcore roar, his Englishness evident in every bile-flecked syllable. In effect, their overall approach parallels Napalm Death’s recent output sans grind, particularly on the d-beat-driven socio-political commentary of Corrupted System and Surrounded By Death’s frenetic assault. The rapid, syncopated bombardments fired off by Flatline and Reduced To Zero result in powerful, hookladen death metal songs: modern-sounding but born from old-school craftsmanship. Whether it’s the pertinent War Rages On, with its sample of Neville Chamberlain’s 1939 Declaration Of War, or the sorrowcast lament, Last Words, Memoriam understand that hooks and lyrical depth are just as important as bone-crunching riffs or surging, destructive double-bass. Memoriam have turned personal suffering and global misery into a laudable artistic achievement.