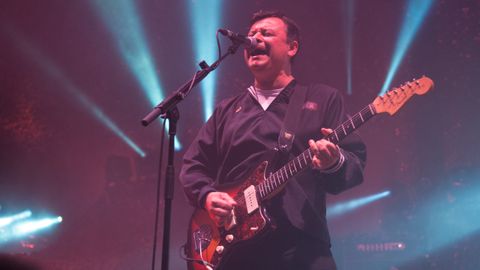 Welsh rockers Manic Street Preachers celebrated 20 years of their classic album The Holy Bible by heading to Camden’s historic Roundhouse for three nights to play it in its entirety. We were there for the first London date. But do they still have that nihilistic fire in their bellies two decades later?

On December 21, 1994, the Manics played their last ever show with guitarist Richey Edwards at London’s now-demolished Astoria. That night, the support act were The Chemical Brothers, who were bottled constantly by the bands youthful, partisan fanbase. Tonight those folk are almost certainly here again, but are too mature and listless to bother greeting warm up DJ Erol Alkan the same way. He plays a distorted version of Submission by the Sex Pistols just before the band arrive onstage and the music still stands up as snarling, vibrant and hate-filled as it ever has. Of course, we all now know that John Lydon is now a podgy, butter salesman from a reality TV show, and this should heed as a warning of what is to follow as the three remaining original members of Manic Street Preachers amble on and begin Yes, the opening track from The Holy Bible. The sound is crystal clear and the telepathic tightness of twenty five years of playing together is still evident, yet what seems to be missing is the drive, energy and spite that fuelled this album in the first place. A look around makes for worrying scenes too, as the majority of the crowd stand stock still and politely nod their head. The Holy Bible may not have aged, but, damn, its creators and fans certainly have. This is a wheezing, weathered version of those Astoria shows. Luckily, if there’s one thing that refuses to age it’s the songs from The Holy Bible itself.

This evening, frontman James Dean Bradfield is clearly struggling with an illness that has affected his vocals, but despite this you can’t argue that the unique feel of this record is still present and powerful. Ifwhiteamericatoldthetruthforonedayit’sworldwouldfallapart is a caustic monochrome stomp, She Is Suffering is heart-achingly, tragically beautiful and Archives Of Pain grimly lurches along as threatening and dangerous as it was the day of its release. There’s absolutely no filler on this 13-song album; the ability of the Manics to be able to meld such diverse music to the seemingly impenetrable hopelessness of Edwards’ lyrics is utterly awe-inspiring. The band have talked about the albums’ attempt to nail a sound that matched Pantera playing Primal Scream’s Screamadelica set, but in reality the record is more like an amalgam of Killing Joke, Joy Division and Nine Inch Nails. As the first set climaxes with the punk phlegm ball of P.C.P., bassist Nicky Wire urges the audience to salute the genius of Richard James Edwards. This is definitely his album, and his absence is the most keenly felt emotion of this set.

After The Holy Bible set ends, there’s a ten-minute break before the band stride back onstage as a five-piece. Having changed from from their Holy Bible-era military regalia to sharp suits, the five launch into Motorcycle Emptiness. The contrast is chalk and cheese. In the second set, the smiles are large and their presence is larger. You Stole The Sun From My Heart and If You Tolerate This… elicit huge sing-a-longs and it’s almost like watching a completely different group of people.

The main problem with the second set is that, as much as it is obvious this is where the band want to be, it highlights how boring the Manic Street Preachers have become. Many cuts from their new album Futurology dominate the latter part of the show, but the set starts to sag and plod and, number one single or not, the aforementioned If You Tolerate This… is closer to Coldplay than The Cult. It’s enough to make you long for the Manics of yesteryear, but from the grins on their faces it’s clear that they aren’t coming back.

It seems unclear just why Manic Street Preachers agreed to do these shows. It’s fitting to mark the two decades since the release of The Holy Bible – and their final show together in 1994 – as a tribute to their long lost friend, but their struggle to replicate the album and the palpable glee at being able to be themselves straight after leaves many scratching their heads. Obviously the nihilistic punks of The Holy Bible have matured, we all have… just some of us maybe a little too much. To ask them to replicate those days exactly would be as hard as asking The Kaiser Chiefs to faithfully cover Behemoth. As they end, quite fabulously, with the evergreen You Love Us and A Design For Life, we’re reminded of what a great band Manic Street Preachers used to be. Time eh? What a bastard.