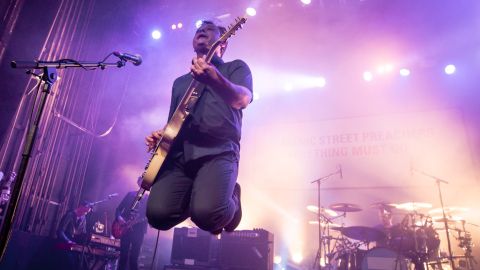 A lone voice, a hearty “I love you!” from the floor, breaks the awkward between-song silence of Vega. “It’s in the book of rules,” James Dean Bradfield replies, smiling. “All people accept love gratefully.”

His appreciation is palpable. Maybe it’s the effects of yesterday’s boozy public holiday but, until this point, the band have barely managed to inspire much beyond gentle head-nodding from the crowd.

Everything Must Go was Manic Street Preachers’ first unequivocal hit, both critically and commercially. With it they sidestepped into the mainstream from the political fringes just as vast swathes of the UK’s rock and indie scene hopped merrily onboard the New Labour Blairmobile. But this mammoth hit of an album barely raised an eyebrow in Denmark; songs citing Blackpool’s seafront and the plight of the British working class failed to land with the same success here, and the Manics would have to wait until 1998’s This Is My Truth Tell Me Yours to finally win over the Danes. Therein lies the problem: tonight’s sold-out show in Copenhagen is specifically celebrating the 20th anniversary of what can very generously be called a modest local hit.

And boy, it shows: the audience is stoic in the extreme. Each song ends with polite cheers of appreciation, but the band seem unnerved by the dead calm from the floor. “Can Copenhagen dance?” asks Bradfield seven songs into the night. “Give it a go to this existential love-boat song!” The love-boat in question is The Girl Who Wanted To Be God; it’s sprawling and lush in a way that makes it feel too big for the room, but the audience grace it with bare-minimum boogie.

Strangely, though, it’s Small Black Flowers That Grow In The Sky, one song earlier, which starts to turn the tide just a little in the Manics’ favour. In a show struggling as badly as this, an acoustic track about inhumane zoo conditions should have died a death as brutal as Marius the Copenhagen Zoo giraffe, who found global fame when he made the significant error of becoming lion chow. Despite this, Bradfield’s impossibly nuanced bellow over solo acoustic guitar silences the room until they erupt euphorically at its end.

Even with the thaw, it’s clear the band can’t wait for the most miserable of birthday parties to be over: Nicky Wire has spent much of the first hour barely containing his sulk behind giant sunglasses. “So, that was Everything Must Go,” sighs Bradfield in his preamble to No Surface All Feeling. “There’s only one thing left to do: jump, jump, jump!” It’s less a rallying cry, more a last-ditch attempt to make something - anything - happen in the crowd.

There’s an obvious shift in the room the moment the greatest hits portion of the night begins. After layering on compliments recognising Danish culture and the sheer sex appeal of its people, Bradfield leads straight from ass-kissing to a deafening, note- and word-perfect acoustic chorus of The Everlasting, the intensity of which clearly reminds him of home. “If you guys get good at rugby, that’s it.”

The sudden change of energy has a marked effect, with hit after not-from-Everything-Must-Go-hit dragging the night back from the brink. 2014’s Walk Me To The Bridge gets bigger cheers than anything from the first half (save for, perhaps, A Design For Life), as does This Is My Truth… album track You’re Tender And You’re Tired - which features, of all things, a whistling solo.

“We don’t want your fucking love,” roars Bradfield during the irrepressible funk of Roses In The Hospital. It’s obvious that on a night like this, no lyric could be further from the truth. The birthday celebrations were a bust, but so it goes with the best laid plans. This is a band who are still somehow unpredictable, still at odds with their audience after all this time, but one who will follow the rules and accept love, gratefully.