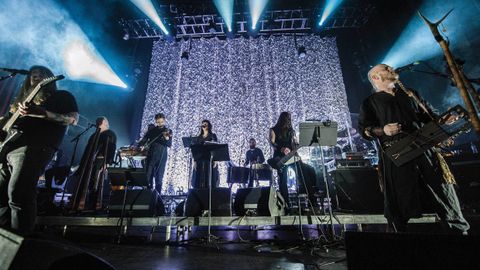 Tonight is a celebration not only of Wardruna and Enslaved, but also of their collaboration as Skuggsjá, a project founded by Enslaved’s Ivar Bjørnson and Wardruna’s Einar Selvik to mark the 200th anniversary of the Norwegian constitution, and of By Norse, a platform for Norwegian music and culture.

By Norse was founded by Selvik, Bjørnson and Simon Füllemann of All Access Agency, and has come to London for four days of concerts and exhibitions that bring Viking and Old Norse heritage to life.

The Cornonet is a magnificent space with high ceilings and ornate features. Around the back, a room hosts an exhibition of paintings by ex-Gorgoroth/God Seed vocalist Gaahl, which people browse before Wardruna embark on their mesmeric, multi-instrumental tribute to Norwegian history. It’s astounding, not least because Einar Selvik and Lindy-Fay Hella’s otherworldly chants reach parts of the soul that others could never reach.

Enslaved are a more dynamic beast, but lose nothing in intensity. Tonight they play from their last four albums, In Times, RIITIIR, Axioma Ethica Odini and Vertebrae, and introduce themselves with, “Thank you Britain for Pink Floyd,” from Bjørnson.

Although they have always shown prog leanings, latter-day Enslaved reveal even deeper shades of separation from their black metal roots. The clean-sung melodies on Building With Fire permeate the otherwise malevolent atmosphere augmented by Grutle Kjellson’s visceral screams.

Tonight’s set, dubbed as Spinning Wheel Ritual, defines Enslaved’s transition from extreme metal to prog, displaying atmosphere, melody and shifting time signatures. Their expansive power is only brought back to earth when Kjellson jokes with a heckler before he’s off again, transporting the crowd through some hellish vortex on Ethica Odini and ending with an exquisite jolt on One Thousand Years Of Rain.

The remainder of the evening is reserved for Skuggsjá, involving all members of both bands – that’s 12 people on stage. Tonight is an aural and visual spectacle fusing Enslaved’s earth-shattering heaviness with Wardruna’s spiritual incantations that blends together exceptionally well.