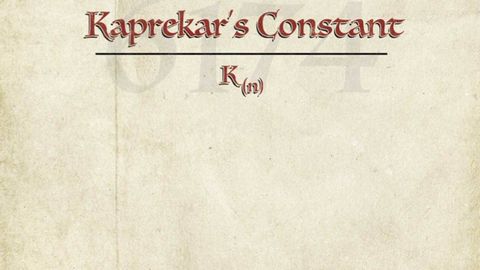 If you only ever thought Kaprekar’s Constant was a hoary old mathematics problem, think again.

This ‘collective’, shaped around songwriters Al Nicholson and Nick Jefferson, has made a debut album which combines an understanding of prog’s heritage with the best of modern production. Fate Outsmarts Desire features contributions from VdGG’s David Jackson, as well as his vocalist daughter Dorie and Level 42 founder Phil Gould. This might have led to a bit of a mess, but Nicholson and Jefferson’s storytelling skills ensure that this album’s vast tracks blend the influence of VdGG, Trespass-era Genesis and Tull with considerable aplomb. What’s especially delightful is the Kaprekars’ understanding of the Englishness of early prog. A stiff-upperlipped voice-over accompanies Bluebird (about speed-merchant Donald Campbell). The spooky-pastoral Hallsands – featuring the salty vox of Bill Jefferson – tells the tale of the death of Devon village. The 21-minute centrepiece, Houdini – King Of Cards, is an album in itself and Dorie Jackson’s beautiful vocals play deliciously off her father’s sax. Like Big Big Train, with whom they stand comparison, a reminder that English classic prog is alive with much to say.