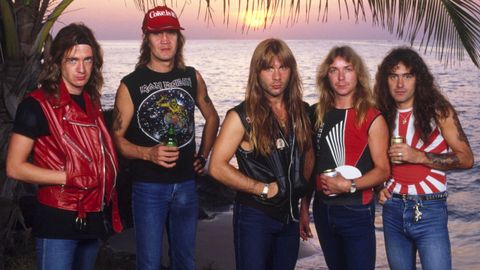 On July 21, 1982, Iron Maiden played the 102nd show on their mammoth Beast On The Road tour, at the Pacific Coliseum in Vancouver. The following day, Steve Harris, Adrian Smith and Bruce Dickinson showed up at the city’s branch of Tower Records, where I accosted them with my copy of Number Of The Beast. They signed it and, back at my uncle’s house, I forced him to listen to the title track.

As Barry Clayton’s satanic introduction boomed through the kitchen, I expected he’d be horrified, while part of me secretly hoped – in the unspoken manner of teens the world over – that he’d be impressed, somehow understanding what I understood, and convert to the cause. Instead, he reacted in the manner of adults the world over, shrugging his shoulders and telling me it was a phase that wouldn’t last. I’d “move on” once I’d “grown up”./o:p

Three decades on, and 2013’s Maiden England shows at the O2 would be more of a family outing, with multi-generational groups of troopers decked out in bullet belts and Eddie-wear.

Back then, approaching Maiden with the sincere, wide-eyed devotion of youth, the band seemed impossibly thrilling. I’d pore over Derek Riggs’s sleeves for hours, looking for hidden detail: the sneaky references to Mickey Mouse and Indiana Jones on Powerslave, or the tombstone engraved with ‘Thank You’ (the Grateful Dead, geddit?) on Live After Death.

Later, Somewhere In Time’s sleeve would be comprised almost entirely of such nods and winks. I approached the music and lyrics in the same way: unquestioning, uncynical and utterly fascinated. Tightly-trousered, long-haired men singing about prostitutes and citing Alistair MacLean without any discernible irony? Sign me up. Iron Maiden are so tied to my teen years I can’t imagine what it might be like to discover the band as an adult. I’m not even sure it’s possible.

It’s the 80s albums that prompt the most affection, those that cover the period before Smith left and the band’s monster mascot was miraculously de-lobotomised. They’re gathered together here in an unimaginative red box (the first three come with the box, the rest must be purchased separately). An attractive glossy varnish has been applied to the individual sleeves, which now embrace the obligatory 180-gram vinyl, and the whole lot has been mastered from the original analogue tapes.

I’ll leave decisions over the quality of these pressings to the experts, although, to be frank, they’re not much help: the Steve Hoffman audiophile forums have more than 50 pages of arguments, ranging from “they sound muffled” to “it’s nice and clear” via “I’m confused”. If anything, they all sound a little quiet, like albums used to sound, before the loudness wars.

Paul Di’Anno’s Iron Maiden and Killers start the ball rolling, and his gruff, guttural vocals are a natural fit. This is Thin Lizzy plays punk, and he copes better with Harris’s occasionally racing lyrics on tracks like Murders In The Rue Morgue and Phantom Of The Opera than his replacement ever did. But his was a parochial voice, lacking the stamina or scale required to lift the band into the stratosphere, and his sacking and Dickinson’s subsequent introduction in time for Number Of The Beast did just that.

Number Of The Beast is the true Iron Maiden Ground Zero, the point at which the final pieces of the jigsaw fell into place. Brand Maiden was created and the Beast has been on the road ever since, a monster that’s part stadium rock, part Winston Churchill, part Hammer Horror, and very, very British. The album still sounds impossibly exciting, stacked with metallic va-va-voom.

Piece Of Mind contains one bona-fide Maiden classic, The Trooper, which rattles along furiously, twin guitars ducking and diving, although it’s To Tame A Land which best demonstrates the direction the band were heading in: it’s a multi-headed rock chimera that starts, stops, speeds up, slows down, changes key and time signature without regard for anyone’s health or safety, and features startling lines like: ‘He is the Kwisatz Haderach, he is born of Calidan, and will take the Gom Jabbar’.

Both Piece and the following Powerslave – which features the gloriously daft, timber-creaking epic Rime Of The Ancient Mariner – are mere entrées to the main course of Live After Death, a dazzling full stop to the band’s first few years. Somewhere In Time followed as the synthesisers arrived and the concept album Seventh Son Of A Seventh Son rounded off the decade, the latter dividing the fans with its unforeseen detour towards prog.