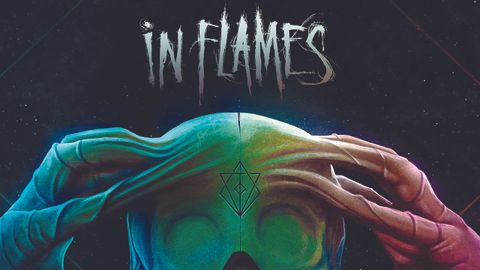 Twenty-six years into their career, it should be no surprise that In Flames have long evolved away from the ‘Gothenburg sound’ with which they made their name – and which they, along with At The Gates and Dark Tranquillity, essentially created. Despite the band’s shift towards a more melodic sound over the latter half of their career, there was particular opprobrium reserved for 2014’s Siren Charms. Its heavy alt rock and even nu metal influences were cited as further proof that, having signed to major label Epic, In Flames had completed their metamorphosis into an entirely different band.

After a tumultuous two years, during which they parted ways with both Epic and long-term drummer Daniel Svensson, the band are back on Nuclear Blast, the label responsible for those early, genre-defining releases like The Jester Race and Whoracle. Those hoping that this homecoming extends to the band’s musical output, though, will be disappointed.

That the band had decamped to LA to record with Howard Benson, a man whose production CV includes everyone from Sepultura to Kelly Clarkson, was the first sign that we shouldn’t be expecting a return to their 90s sound. But it’s always a mistake trying to second-guess In Flames, who by their own admission achieved their creative goals years ago and don’t feel like they have anything to prove to anyone.

While undeniably a more ‘metal’ record than Siren Charms, Battles simultaneously furthers the band’s progression towards a more vocally melodic and, dare it be said, commercial sound while returning some elements perceived to have been missing on previous releases. Opener Drained acts as a microcosm of the record: in parts classic In Flames, with frenetic riffing and pummelling drums under Anders Fridén’s unmistakable scream but with a huge, synth-swaddled chorus.

The End may have a more metalcore feel, but its hyperactive riffs and roared verses are sure to reassure fans who’ve been waiting for a ‘proper’ In Flames record since 2006’s Come Clarity (or earlier). Those much-maligned alt rock elements creep back to varying degrees – Like Sand in particular has more than a hint of 90s Seattle about it – but they’re always tempered by the interplay between guitarists Björn Gelotte and Niclas Engelin. In many places, it’s a harmonised riff or a sudden, squealing solo that lifts an otherwise pedestrian song out of the mire and makes you sit up and take notice again, like the euphoric twin-guitar break on closer Save Me.

Ultimately, it’s difficult to judge the 12th record by any band, let alone one as influential as In Flames, without reflecting on what’s come before. But any record has to be taken on its own merits and on that basis, Battles is just a decent pop-metal record. Is it going to win over fans who think the band’s last good album was released during before the turn of the millennium? Probably not. But if Siren Calls was the point at which In Flames lost you, then this might just be the olive branch needed to bring you back on board. Technical, heavy, catchy and proof that sometimes a little turbulence is what’s needed to shake a band out of stagnation.

What was the impact of recording with Howard Benson?

“He said, ‘I’m not going to change you guys, just make you better at what you do.’ That attitude clicked with us. He gave us pointers, but never said, ‘You should sound like this band.’ He was probably afraid the metal community would give him a lot of shit!”

Are there any specific tracks of which you’re particularly proud?

“Here Until Forever as I wrote the lyrics for my son – it is the closest to my heart.”

What Is The Key To In Flames’ Longevity?

“We focus on writing the best melodies and don’t think about how the outside world will listen to our music! In Flames as a collective is bigger than the individual, and we are very strong as a unit.”