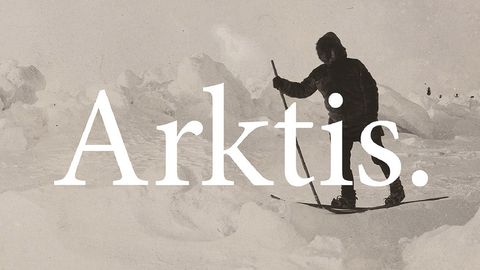 Even by his own daring standards, Ihsahn’s improvisational fifth album Das Seelenbrechen was a revelatory detour, splitting opinion among his legions of disciples.

Many praised its virtuous creative experimentation, but others found it an impenetrable step into the wilderness. Now, having laid his beloved Emperor to rest for the third and perhaps final time, Arktis. sees the visionary Norwegian take another measured, strategic passage into uncharted territory, rather than leaping headfirst into the unknown.

Disassembled picks up where 2012’s Eremita left off, with a fiendish, instantly recognisable riff and Ihsahn’s unmistakable, sinister vocals, launching Arktis. on a dark tide. However, this soon gives way to the first of many rays of light bursting through the shadows, with a lush explosion of Hammond-led choruses and the melancholic croon of Leprous frontman Einar Solberg creating one of the most melodic moments of his entire discography. Mass Darkness, meanwhile, sees him joined by Matt Heafy for a metal-plated epic that again rises from murky depths of blackened textures into a homage to Mercyful Fate, complete with galloping leads, vocal histrionics and bursts of strings. My Heart Is Of The North echoes Opeth at their prog-worshipping best, a heady mix of rich keys and spacey guitars, before stripping down to delicate vocals where Ihsahn lays his soul bare. The bleak electronic din of South Winds, trading off between lurching, menacing riffs and resplendent passages, encapsulates the album’s none-more-black-metal inspiration, the vastness of the frozen north – albeit more recalling Robert Peary and the heroic age of polar exploration more than Immortal-style battles in the snow.

The majestic In The Vaults utilises more strings and some of the most delicate melodies in Ihsahn’s arsenal; the rumbling intricacies of Pressures explode into full-blown symphonic grandeur before Until I Too Dissolve’s infectious hard rock grooves and hooks deliver the simplest, most gloriously effective composition Ihsahn has ever put his name to. Frail’s twisted electronics wander into more minacious depths, with malicious tentacles wrapping themselves around moments of quiet foreboding, while the moody Crooked Red Line sees the return of Shining’s Jørgen Munkeby on saxophone, favouring smooth, soulful jazz rather than the frenzied cacophony of his day job and the pair’s previous collaborations. Finally, Celestial Violence builds from gorgeous, dulcet passages to dramatic walls of strings that stir the soul with seemingly limitless impact, Einar Solberg again complementing Ihsahn’s harsh howl with rich tones of heartache.

Though not immediately as challenging as previous efforts, Arktis.’s sheer scope and diverse range of emotions and sounds is clearly the most complete and celebratory statement Ihsahn has ever conjured. Rising again from his previous incarnation he has once again proved he’s a pioneer without equal, striving forward into unexplored sonic territory.

HOW DO YOU FOLLOW UP AN ALBUM AS BIZARRE AS DAS SEELENBRECHEN?

“I’ve always sketched out the kind of music I want to make, before I start writing. It needs to have some formula or goal. With this album, I tried to stick to the formula, and in the process I trust that, in the end, it’ll sound like me somehow. It’s not so far-fetched that it’s not identifiable as something that I did.”

DO YOU EVER WORRY THAT YOU’LL TAKE THINGS TOO FAR AWAY FROM METAL AND ALIENATE YOUR FANBASE?

“The writing was very different on Arktis., but there are still guitars and drums and screeching vocals. I won’t be picking up a banjo any time soon! I just try to keep the process interesting and exciting for myself. No one cares about albums anymore so you have to do it for yourself!”