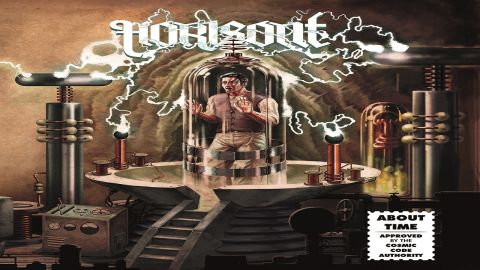 While still retaining their masterclass mix of Quo, Priest, Thin Lizzy and Scorpions, Horisont recently expanded their repertoire with the addition of some Rush and Focus-inspired keys courtesy of their dambusting vocalist Axel, altering the writing process and inspiring more elaborate, but still-swaggering, anthems in the process. This newer, synthy sound carries along the sci-fi themes of the band’s fourth album perfectly, and with each release the band have progressed with the times – if not recent times. The beginning of their 10-year career started with a sound circa 1970 and is currently up to 1980, with each album becoming more satisfyingly complex. Hints of stadium-sized AOR rock are creeping in slightly, as the band slowly embrace the 80s era of overblown pomp and power.

With the release of About Time, a new label and some upcoming international tours, Horisont should be gaining the wider recognition and acclaim of fellow Swedes Graveyard, along with Uncle Acid And The Deadbeats.