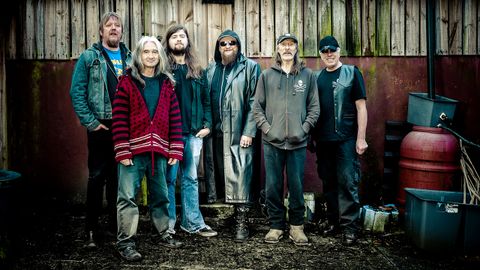 For those who believe Hawkwind’s best days are behind them, this album is likely to come as a massive jolt. That’s because it comfortably ranks alongside any, and above most, of the albums the space rockers have recorded over the past 35 years or so.

It’s a concept, based on the EM Forster short story The Machine Stops, which might have been written close to 90 years ago, but which has a contemporary dystopian parallel. And that mirrors the way Hawkwind sound. They offer a strong whiff of the style through which they have forged their reputation, with the odour of a modern psychedelic groove.

While others might have played fast and loose with the basic story, this is not the case here. The band adhere closely to Forster’s rather frightening vision of a world too dependent on technology, opening with All Hail The Machine, setting the scene for an era when there’s overconfidence in the infallibility of machines, something that’s soon undermined.

The album has a pervasive darkness that not only reflects the vulnerability of humanity relying on technology that’s slowly decaying, but also has more than a glint of fear about the way in which the actual world is moving. You can hear this in King Of The World, which is swathed in Tim Blake’s eerie keyboards. These also imbue In My Room with a growing claustrophobia. And Hexagone uses an early-70s quirkiness to represent someone who wonders what it must be like to live on the planetary surface, having spent their whole life cramped in an underground cell.

As the album builds towards the denouement, the music becomes increasingly stark, as people begin to understand that the machines which run their lives are breaking down, and nobody has the skills to repair them.

Yum Yum is a short interlude capturing the insanity of the situation, as people retreat into themselves, before Lost In Science ends everything on a juddering warning that the world outlined here could easily become our reality.

There’s a chaotic resonance to the way it develops, finishing with Blake pounding out a portentious piano piece that feels like an extract from the soundtrack to a silent movie like The Cabinet Of Dr Caligari, and in doing so it’s both downbeat and tormenting.

Dave Brock has long used his artistry with Hawkwind to entertain yet also to get us to think. This is among his most effective blows.