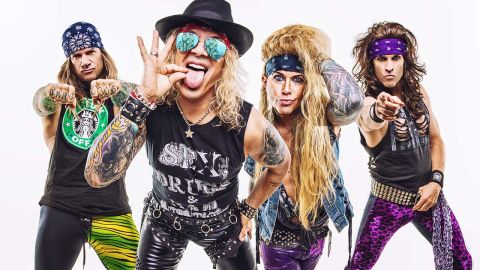 A big factor on your opinion of Steel Panther will certainly come down to your sense of humour. As far as we're concerned, jokes about dicks, drugs and diseases of the venereal variety will usually raise a smile from our immature minds. But while the band's never-ending onstage silliness continues to be something of a draw, on record its impact has begun to diminish over recent releases.

What used to be no joke, though, was the fact that for two-and-a-half albums, the band were writing hits as good as – if not better than – the 80s hair metal acts they were so effectively pastiching.

And much like those bands who enjoyed the spotlight before fading away, Steel Panther's bright spark was less dazzling on Lower The Bar and has largely failed to reignite on Heavy Metal Rules.

Musically, at least, you're still in the company of some outstanding practitioners with Satchel's scintillating leads in particular fit for the lavish excesses of the 80s Sunset Strip, and proving to be a highlight throughout.

There's some tasty riffs and even a Hammond organ on ballad Always Gonna Be A Ho that somehow works around the rhyming of Ho with Russell Crowe.

The album's other successes are of the same nature, with All I Wanna Do Is Fuck (Myself Tonight) and Fuck Everybody overcoming some extremely clumsy verses for the sweary choruses to relentlessly batter the door down. But after that, pickings are slim if you're looking for a rousing hook rather than juvenility.

The title track's steel-plated Priest-worship and acoustic finale I Ain't Buying What You're Selling might work their way into the live setlist, however, there won't be many crowds baying for the likes of Gods Of Pussy, Let's Get High Tonight or I'm Not Your Bitch. Heavy metal does indeed rule, as do an on-form Steel Panther, but album five isn't the best case for either.

Heavy Metal Rules is out now and available digitally, on CD and on vinyl.