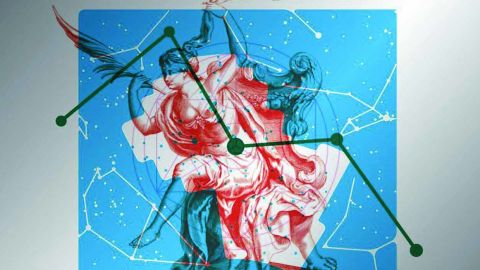 If Mary Casio: Journey To Cassiopeia sounds like a bizarre collision between an analogue synth wizard and a brass band, that’s because it is. The third album from electronic musician Hannah Peel (a member of The Magnetic North, and sometime collaborator of John Foxx) is a seven-movement piece composed for analogue synthesisers and 29-piece colliery brass band. It recounts the journey of an elderly stargazer, the titular Mary Casio, from her home in Barnsley to the star constellation of Cassiopeia. The results are affecting and poignant, Peel creating a tension between Earth and space, and a sense of longing for home. It’s like the Kes soundtrack meets Yes, or a team-up between The Flaming Lips and The Brighouse And Rastrick Band. It starts with the swirling arpeggios of Goodbye Earth, moves through the rousing fanfare of Sunrise Through The Dusty Nebula, continues with the brass parps and synth whorls of Deep Space Cluster, and reaches an emotional peak on the ominous Andromeda M31 and majestic Life Is On The Horizon. Finally, there’s Archid Orange Dwarf and The Planet Of Passed Souls, the album assuming the tenor of a parable about the journey from life to death.