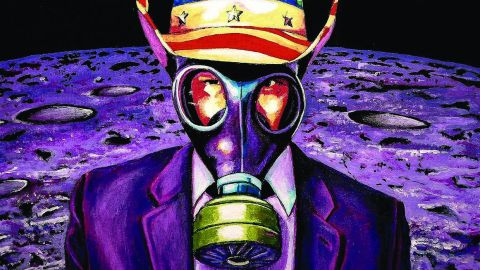 The Galactic Cowboys were always an intriguing and hugely entertaining proposition. Formed in the early 90s, they made a breakthrough with 1993’s Space In Your Face. Yet by the end of that decade, after numerous personnel changes, they disbanded with the release of Let It Go. The key to their unquestionable appeal was an ability to seamlessly fuse heavy riffs with Beatles/Cheap Trick melodies, and thankfully, that knack hasn’t decayed over the last 17 years. Long Way Back To The Moon opens with In The Clouds. With a pseudo doom metal riff accompanied by sumptuous vocal harmonies, it’s a deliberate statement of intent. Zombies is similarly alluring and calls to mind The Wildhearts at their peak, with timeless pop riffs propelling the song. Elsewhere, the title track highlights their softer side, and lovers of Built To Spill will appreciate this innovative direction. Those who prefer a more restricted definition of progressive music will no doubt find much to bemoan here, but there can be no denying the band’s technical ability or boundless talent. Experimental but retaining an accessible edge, the Cowboys have returned with style and aplomb.