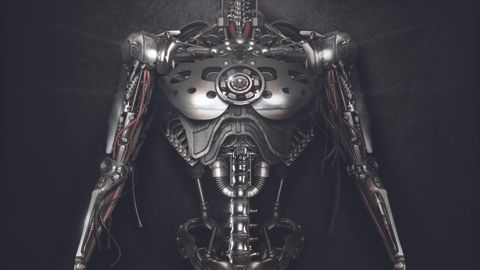 The machine marches on, having survived not only a nu metal phase but deconstruction, lynchpin members Burton C Bell and Dino Cazares finally resolving their differences for a lethally triumphant return in the form of 2010’s Mechanize.

Genexus, post-reformation album number three, continues in much the same vein, returning the band’s sound to its original programming, a design that made 1995’s Demanufacture a flawless classic.

The result is another album that sounds similar to its predecessors, a long-levelled criticism, but a criticism that withers in the face of the glorious aural battery of Dielectric. Diversity sneaks in any time the persistent piston-pummel of double bass briefly relents, playing with tempo and groove on Protomech and sweeping the soul up in Regenerate’s dark embrace, courtesy of a particularly spinetingling Burton C Bell chorus. Effectively referencing past glories while continuing to gaze fixatedly into humanity’s future, the subject matter remains as prescient as ever, exploring themes of trans-humanism and our search for individual identity amongst the swarm: ideas that only increase in relevance as we inch ever closer towards self-annihilation. Genexus may well sound like it was assembled on a production line, but it emerges heavily armoured and capable of devastating without pity, or remorse.