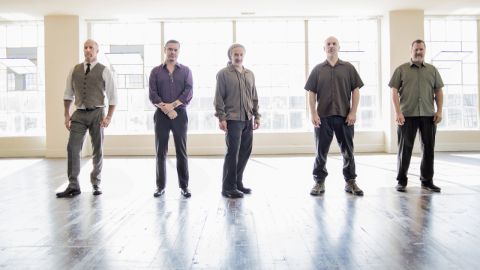 It’s both amusing and embarrassing to observe entitled music fans stridently declaring what reformed ‘heritage’ rock bands should or should not be permitted to do with their own careers, as if they, and not the musicians themselves, are the only true, trust-worthy custodians of these iconic brands.

However, save for the inevitable try-hards crowing ‘No Jim Martin, No Faith No More’ – or indeed ‘No Chuck Mosley, No Faith No More’ – the revelation that the reunited Faith No More were working upon their first studio album in 18 years didn’t generate the same sort of anguished indignation which accompanied, for instance, the news of a new Pixies record, or the idea that Refused might have the temerity to attempt to follow up The Shape Of Punk To Come. It might just be that FNM have earned that most valuable and rare commodity, trust, or simply that the quintet’s patient, slow-burning resurrection has been conducted without any recourse to self-aggrandising or hype. Whatever, the wait is now over.

Perhaps the most instantly notable aspect of Sol Invictus is just how seamlessly the album follows on from its predecessor, 1997’s cockily-titled Album Of The Year. Recorded at a time when more than one member of the band seemed more interested in individual side projects than the collective whole, Album Of The Year assimilated FNM’s disparate influences – post-punk, metal, electronica, grindcore, soul, whatever - into arguably the most tightly-bound body of work in their canon, and impressively, given how long these five musicians have been uncoupled, Sol Invictus goes further, to even more potent, startling effect. While deep immersion in the album’s 10 tracks allows the isolation of numerous wonderful individual ‘moments’ – the sweet melodica swells in Rise Of The Fall, Roddy Bottum’s earworm cyclical keyboard riff in Superhero, the utter contempt heard in Mike Patton’s voice on Black Friday – the overwhelming first impression is just how brilliantly Faith No More’s component parts interlock and engage here. That these long-estranged collaborators can achieve such cohesion and momentum without dependence on nostalgia or familiar tropes is laudable, and indeed at various points here, utterly remarkable.

Separation Anxiety, anchored on a filthy, locked-in bass and guitar groove, is one of the best songs Faith No More have ever recorded, building inexorably in intensity and fury to a thrilling, all-action climax, and when Mike Patton sings “I can’t let you go, because you’re a part of me, not apart from me” it’s a tacit, and rather touching, acknowledgement of the group’s shared history and experience. Patton throughout is utterly compelling, his range and dynamism an undeniable validation of his status as the finest vocalist of his generation, but one never senses that he’s merely running through his repertoire, each croon, whisper and shriek perfectly judged within the architecture that surrounds it. He sounds psychotically cheerful on the delightfully twisted Sunny Side Up (opening lyric: “I’ll be your leprechaun…”), increasingly unhinged on the murderously heavy run-out of Cone Of Shame (sample lyric: “I’m only happy when I’m pissing you off”) and simultaneously menacing and angelic on Motherfucker, the album’s most accessible and gleefully airplay-unfriendly outing, memorably premiered during FNM’s support set at Black Sabbath’s Hyde Park show last summer. In another band, this bravura performance would leave less capable colleagues fighting for breath, but Gould, Bottum, Hudson and Bordin are never left behind, never outgunned, and it’s their sympatico understanding which drives the likes of Superhero and Matador to sterling new heights.

This most impressive of comebacks ended in typically assured fashion, with From The Dead, a shimmering, summery meld of acoustic guitars, beatific stacked choral vocals, martial beats, Theremin wibbles and chiming bells, which makes a mockery of Faith No More’s perceived status as an ‘alt- metal’ band. “Welcome home my friend,” Patton sings at its climax, an apposite end to a 40-minute set which only serves to underline and emphasise the quintet’s reputation as one of the most dazzlingly distinctive, inventive and sui generis rock bands of all time. Welcome home gentlemen, we’ve missed you.